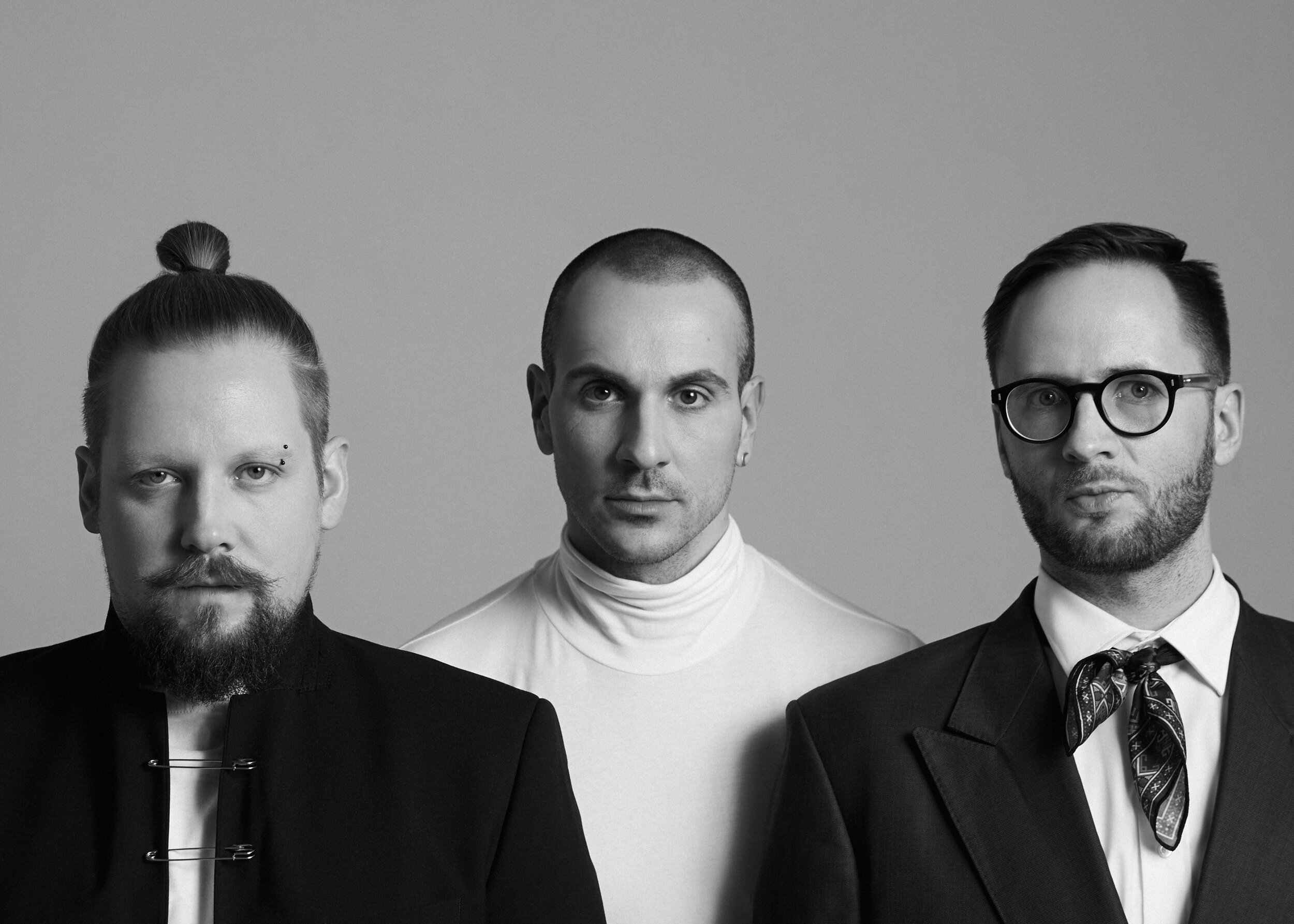 THE ROOP certainly take their work seriously. This new, fresh-sounding pop rock band released their video for debut single "Be Mine" with international actress and social message in November of 2014. However, they were far from being called unexperienced, all members of the band have been previously active in other music-related projects and the lead singer is also known as a TV host and an actor. Band spent almost four years in the studio looking for that perfect sound - writing 50 songs in the process before finally deciding on 10 good enough for their debut album "To Whom It May Concern". Record came out on November 30th, 2015; and CD came out on March 25th, 2016. An extra touch was added by Australian Leon Zervos – top mastering engineer from Studios 301 (Sydney) who has worked with INXS, Aerosmith, Muse, Coldplay and many other music's biggest names. The video of "Not Too Late", which came out in the late October of 2015, contains the latest technologies in video shooting and allows the viewer to undergo a whole new experience in video watching. What they did is a combination of two complex technologies in one music video – 360 degree shooting and animates characters.

The second album "Ghosts" came on 16th of October, 2017. Band members openly confess that the recording period was a real challenge – the band was on the verge of splitting up. This album consists of 9 songs, among them several already known tunes: the dreamy "Dream On", open and intimate "Keista Draugystė" and "Hello" – the latter is famous for its bold video picturing real people and their life stories. Third and latest record – EP "Yes, I Do" – was released on May 25th, 2018. It was called after a song the band wrote for the Eurovision Lithuania National Selection where they stood out and won public's heart. The EP consists of 5 solid songs, among which are "Yes, I Do" and a duet featuring singer Migloko – "UFO". THE ROOP music is being played in different countries all around the globe: Lithuania, Belgium, Germany, France, Australia, Columbia, Romania, Serbia, Brazil, Portugal, USA and etc.

THE ROOP concerts are a mix of energy and feel. Listeners never remain indifferent and bravely get immersed in the musical storytelling of the band. Live shows are characterized as lively, honest and having strong relationship with the audience. THE ROOP appeared in all of the largest Lithuania's music festival, such as Granatos Live, Karklė, Galapagai, etc. As well, played in the biggest festival in the Baltic States - Positivus (Latvia). Also THE ROOP played in Riga and Jelgava(Latvia), Bonn (Germany), Gdansk and Warsaw (Poland), San Francisco (USA).

After successful appearance in 2018 National Selection THE ROOP were constantly asked about participating again. According to the band those questions strengthened their decision to return to the competition even more. Two years after "Yes, I Do" THE ROOP returned with "On Fire". "This year's song is about something I carried within and observed around myself. It's about writing yourself off too quickly. We are underestimating ourselves too often. We think we don't meet some standards or that we are uninteresting, too young, too old." – said leader of the band Vaidotas Valiukevičius - Naive. While talking to one music producer, Vaidotas learned that rather often people in their early twenties come to producers but declare feeling too old to achieve something. The singer believes that the youth cult is too big and inadequate. "People in their thirties already feel untimely aged and hopeless. I believe this is not normal. I faced such thoughts myself, but I strived to change my approach to things, put more energy into my activities than I did when I was 20. With this song I wish to send my listeners confidence and good vibes. We are all capable of being who we want, when we want, and age is not important" – told Vaidotas. According to the band, the name of the song “On Fire” means being in the state of excitement, feeling passionate, engaged and full of energy.

The vibrant music video was produced by director Indrė Juškutė and cinematographer Adomas Jablonskis. "We are often observed by others as if through a magnifying glass, we search for ourselves in reflections of other people, in the public opinion, in gazes of strangers, and most frequently the image is incomplete, crooked. But when you gain confidence reflections become nothing but a game" – director Indrė describes the idea of the video.

03/01: Participants of the national preselection revealed

Only the citizens of the Republic of Lithuania are able to participate in the Contest as performers, no restriction is applied to the songwriters. Performer can enter with the song, or choose one from the list of entries submitted to the contest by songwriters. An innovation is that performers or bands will only be able to enter with one song. More than 60 works have been received, of which 36 have been selected for the live shows.

National Lithuanian Eurovision preselection will be hosted by familiar faces - LRT presenters Gabrielle Martirosian and Giedrius Masalskis, who had hosted the event last year, and singer Ieva Zasimauskaitė who will be chatting with the artists in the Green Room and helping them to introduce themselves to the Lithuanian audiences. "We invited Ieva to join the team on purpose. The broadcast brings together many new faces every year that the viewer wants to know more about. We believe that the person who has been on the big Eurovision stage and understands the importance of not only music but also communication is the best to talk to them, to reveal them, to help evaluate how well they are able to represent Lithuania in this competition. After all, Ieva won the Eurovision audience's sympathy not only for her song but also for her sincereness, "says LRT chief producer Audrius Giržadas. "I had a great dream to host an event, and my dreams come true", Ieva herself adds.

Names of 36 acts chosen for the national preselection have been announced on 3 January. "This year's national selection will see new faces as well as a few of the recognizable contestants. It is gratifying that the interest in Eurovision in Lithuania is not diminishing - the contest has a loyal crowd of fans and the national selection attracts many people who want to try their hand every year. The members of the preselection task force have chosen participants based on the originality of the song, the quality of its performance and its potential to compete on the big Eurovision scene. We also sought to ensure the diversity of musical styles and reveal the pulse of the contemporary Lithuanian music world. We are going to hear a lot of interesting, talented performers in the national selection, so now we have a responsibility to choose the only song that will be on the big Eurovision stage, "says LRT Chief Producer Audrius Giržadas.

There will be three qualifiers with 12 acts in each, with half of acts qualifying to the semifinal stage. After each of the two semifinals five acts will be relegated. Thus, national final round will feature eight performers. The winner will be selected jointly by television viewers and a panel of five members who will rotate each show. In televoting up to 5 votes will be allowed from one phone number. The cost per call or message is € 0.60. The portion of the proceeds that LRT will receive for viewer calls and SMSes will go to support chosen contestant.

There is also a new jury comment procedure: Instead of commenting on each piece in turn, commission members will only do so in a few spots during the broadcast. In addition, they will watch shows in a studio other than the screening studio. This will create a closer effect to the main Eurovision. Jurors will also sign principle of impartiality. Results of the jury vote will be only announced after the closure of televoting lines, not to influence viewers.

For the maximum transparency, voting will be overseen by the audit company Grant Thornton Baltic at all stages of the selection process. Also, the voting results of the audience will not be shown during the concert, they will be only seen at the end of the show. When the winner of the national selection becomes known, the LRT will provide financial support for the improvement of the performance (stage effects, directing, vocal lessons, costume, etc.).

LRT has also invited Eurovision fans to attend the filming of the show for free and watch all performances live. LRT Chief Producer Audrius Giržadas says: "Just sign up with an email. Email to registracija@lrt.lt , and indicate your name and show you want to come to". Filming of the shows takes place on Tuesdays at 7pm. and lasts until about 10pm. Second heat will be filmed on Wednesday and final show will be broadcast live on Saturday. Although children are not forbidden to participate in the filming, Audrius Giržadas warns parents, who intend to bring the little ones to the filming. "During the filming, the big studio at LRT has a big sound and bright, ever-changing light, which is not very good for children".

"Pabandom iš naujo!" final will take place on Saturday, February 15 at the Žalgiris Arena in Kaunas and will be broadcast live on LRT. "This year we are preparing the final of the national selection together with Kaunas City Municipality - it will be held together with the annual "Aš – dalis tavęs" celebration in Kaunas. The first part of the festive evening will feature well-known Lithuanian musicians and the second part will select the winner of the Eurovision national selection. Both parts of the concert will be broadcast live on LRT", says the LRT chief producer Audrius Giržadas. Last year the finale took place at the LRT Big Studio, which seats up to 200 spectators. This year, it was decided to hold the finale in a larger concert hall so that more viewers could see and hear the Eurovision selection participants live.

Free invitations to the concert and the Eurovision National Selection Final will be distributed by Kaunas City Municipality. It is planned to distribute 4 thousand invites, twice as many invitations as were given to the Kaunas Municipality during the festive concert last year. The invitations will be distributed at the Kaunas - European Capital of Culture 2022 office. The first part of the festive evening will feature Alina Orlova, Monika Liu, Andrius Mamontovas, Jurijus Veklenko, Vidas Bareikis, Kostas Smoriginas, Mantas Jankavičius. In the Eurovision National Selection Finals, we will see the eight best-placed qualifiers in the semifinals.