On 29 January Česká televize has revealed plans for the return for the first time since 2008 to the televized national preselection show Eurovision Song Contest Czech Republic, scheduled to take place on 25 January 2020 in Forum Karlín in Prague. On the same day all interested musicians, producers, composers were invited to submit entries for the participation. Entries should follow basic Eurovision rules and should be not presented to the public before. At least one lead singer had to be a Czech citizen. Broadcaster underlines that songs in any genre are accepted: metal, folk, disco, pop, emo, trap and anything else is welcome. Songs should have been submitted until 30 June 2019 to escmusic@ceskatelevize.cz. The deadline has later been extended until July 31. A total of 152 of entries were submitted to the Czech broadcaster, out of which 72 songs were submitted by Czech composers. The Czech broadcaster declared being pleased that the interest in Eurovision has increased amongst the local composers in comparison to last year.

In September it was revealed that a jury formed of Jan Potměšil, Jan Bors, Kryštof Šámal, Marvin Dietmann and Cyril Hirsch, listened to the submissions and determined the eight finalists. Four acts were unanimously selected, while the final four were selected through an auditions round in Studio A of CT on August 27 and 28 which featured twelve longlisted acts. During audition acts the artists were asked to perform a number of tasks entirely in English: to sing a song, to introduce themselves and their song, what it is about, what it means, how it was created, how they imagine themselves on the stage, what Eurovision means for them etc.

On 30 October the Czech Republic's Head of Delegation, Jan Bors has announced leaving CT. Bors was working with the broadcaster for 12 years and was appointed as the Czech Head of Delegation in 2016 and has led the Czech Delegation for four years. Former Deputy Head of Delegation Cyril Hirsch has been named as the new Head of Delegation. Hirsch is a production manager at Ceska Televize, currently working on the tenth series of StarDance. On 6 November CT has announced dropping plans of the live televized show final returning to the online preselection instead. "After several weeks of long and VERY DIFFICULT decision making, we have decided, due to many and many and many and many circumstances, to postpone the TV format for another year (may be next one?). We want to do something really different and this year we felt it wouldn't work in a way we dreamed". Later in November, Bors has revealed that the cancellation of the televised broadcast of the Czech selection was the final straw that lead to his departure from the role. Yet, he highlighted that "the team is strong enough" and there is "solid foundation built in the competition" and "a proven model". Bors also assured there are amazing songs this year on offer.

On 2 December it was announced that one of the chosen acts has withdrawn from the competition. The remaining seven acts taking part in the national final were revealed on 13 January on Instagram under hashtags #ESCZ2020 #unfoldyourdream #slozsvujsen. Contest entries will be revealed on January 20 at 8:00 am and the winner will again be decided by the votes of the audience via the official Eurovision app and the votes of international jurors. Voting window is open until 2 February 20:00 CET and the winner will be announced in the evening of 3 February.

There are 11 artists involved in the competition. Four of the seven acts are female soloists. Two acts have competed in the past editions of ESC CZ. One of the acts has played over 1,500 shows, one 350, another 300 and another 76, one has played only 4 gigs and the other two have done 0 live performances. The shoe sizes of all the participants have been given: 35, 37, 37.5, 40.5, 41, 42, 42.5, 3x43, 45.5. The acts have defined the songs as having these genres: Organic pop, Dream pop, Indie pop, Emo pop, Afro pop, Reggaetón, Planned coincidence punk pop. Their favourite contemporary musicians are: "Billie Eilish", "Vlasta Rédl, První Hoře, Lenka Dusilová", "Anderson .Paak", "I rather judge song, not the performers", "Ed Sheeran, Kodaline, Imagine Dragons, One Republic", "psychedelia and a mix of things .. there are so many .. that can't be said ...", "Rosalía". Other clues included superpowers and origami figures.

Barbora Mochowa was born in Trutnov in 1993. When she was 7 years old, she participated in a television contest Rozjezdy pro hvězdy, and then appeared in several more television shows afterwards. Barbora wanted to play the violin, so she started studying voluntary art school in Trutnov. As a result, she still has a very close relationship to classical music, and thinks this is also reflected in her own productions. In 2019, Barbora attended the first Czech song-writing camp where she met the producer Viliam Béreš. Together, they composed the song True Colors which was selected to the Czech national selection of the Eurovision Song Contest 2019. As of now, they're working on her second album with Viliam Béreš, and the album will also include the current song for the national selection.

Benny Cristo has been working in the Czech music scene for 10 years. In 2019, he released his new EP Kontakt, which contains a total of 6 songs including hits Aleiaio an Plan. His biggest hits so far are songs called Bomby (24 million views on YouTube), Asio (14 million views) and Padam (24 million views). In September 2019 he performed at the almost sold-out O2 arena for 15.000 people, which he decided to do again in 2020. In addition to his musical career, Ben is a professional jiu-jitsu competitor and holding prestigious awards from international tournaments in his category.

Elis Mraz is a Czech singer and songwriter. Her writing skills are evident in the collaborations on her forthcoming album for which she took writing and recording trips to Los Angeles and London. Early in her career, she reached the semi-finals of NOVA Voice of the Czech Republic and became the summer face of an advertising campaign 'Say it through Song'. She won the Czech Nightingale Mattoni 2014 award in the 'Discovery of the Year' category.
Cis T (Čistychov) is an urban hip-hop artist from Bratislava, Slovakia. He started to record tracks in 1996. He was active with his first group L.U.Z.A. and founded and was part of the legendary crew NAZOV STAVBY which was defining the hip-hop sound in Slovakia at the time. He has released 13 studio albums so far.

Karelll is a Czech singer-songwriter and a music producer. He studied songwriting at the BIMM Institute in London. During his studies, he gathered so much experience that made it possible for him to launch his career right after he finished university. When he came back home from the United Kingdom, Karelll opened his own recording studio and started to utilize his experience. Nowadays, he writes and produces songs for himself and for many other artists. He has also started a band with whom he is planning to perform live.

Olga Lounová is a singer, composer, activist and rally driver who has found success with over 1500 concerts, multiple millions of YouTube views and numerous hits in her country to her name. She opened for P!nk during one of her concerts in Prague. Olga has recently lived in Prague and Los Angeles, where she already recorded several tracks for her new upcoming record with well known and respected producers. She is also involved in various humanitarian activities.

Pam Rabbit is a singer and writer from the Czech republic with Armenian roots. As a young girl, she found a passion for music and dancing. She creates her own music videos. Pam is a student at the Jaroslav Ježek Conservatory and makes her living by singing in bands and writing songs for other singers. Pam really cares about freedom, this can be heard in her lyrics. She found a big connection with animals and that‘s how she got her nickname Rabbit. She is not new to the Eurovision Song Contest; Pam was a backing vocalist at the Eurovision Song Contest 2018 for Mikolas Josef and took part in the Czech Republic's national selection in 2019.

We all Poop is a pop-rock band consisting of 4 people:
Jakub Božek – lead singer. Since he was 14, Jakub has been doing music, especially playing the guitar. He attended music lessons at a basic art school and started singing at the age of 27. He never formally learned to sing, he only started taking lessons recently. He is a co-founder of an asylum for livestock - The Hope Farm - where he has worked since its establishment until the summer of 2019. He has been active in the field of animal protection in general since 2010.
Vojtěch Božek – bass guitar. Vojtěch (Vojta) is 25 years old and was born in Prague. He has been doing music since he was about 15, but also has a pilot license having majored in aviation mechanics. He founded a music label named Stone Smoker, who mostly works with psychedelic bands from all over the world.
Šimon Martínek - guitar. Šimon has been playing in several bands, where he is the guitar player, but also songwriter and vocalist. Besides being in a band himself, he is also a guitar teacher at the International School of Music and Fine Arts in Prague. He currently attends the Prague Conservatory himself and majored in Arts management between 2014 and 2018.
Michal Jiráň – drums, main composer. Michal studies the piano when he was 10 and added guitar and bass guitar at the age of 14. A year later, he started to play the drums and started studying at an arts school. During his studies, he worked as an assistant editor at TV Nova, and later as a sound engineer in the theatre of the international conservatory and at a recording studio. He currently works at the Divadlo v Dlouhé theatre, plays the drums in the Perutě band and is working on music production. 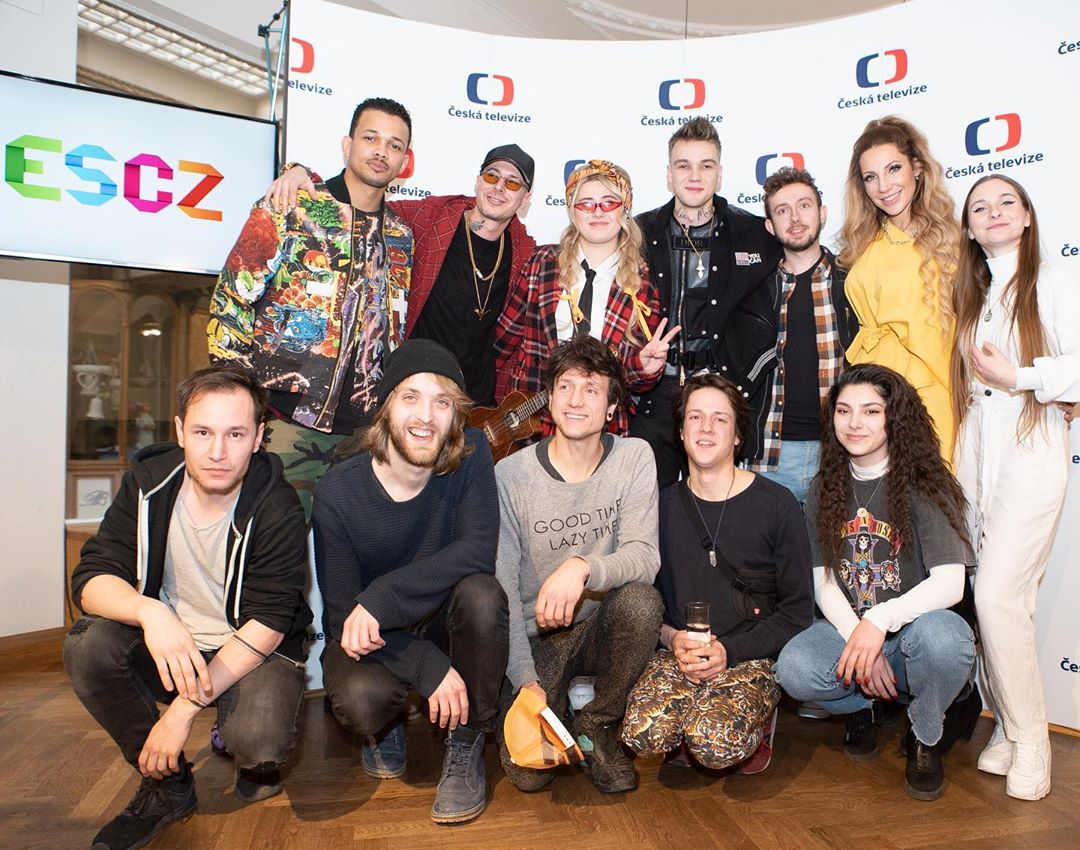