16/01: Nine finalists of Supernova 2020 revealed
09/01: Songs taking part in the preselection have been published

On October 10 the application period for the sixth season of Supernova contest has begun. The winner of Supernova 2020 will have the opportunity to take part in the 65th International Eurovision Song Contest, to be held in Rotterdam, the Netherlands, next May. Songs could have been entered until November 20th. The competition is open to authors, performers and producers aged 16 and over. Foreigners can also participate in songwriting and be members of bands, provided that their songwriting credit is less than 30% in musical work and the number of such persons in a band does not exceed 30% of the total.

"The interest in the competition and application process has been higher than in the previous five years, so we are expecting more quality applications, "stated contest producer Ilze Jansone, who turned to be right as number of applications has reached 126. "Several artists have submitted two songs, this year there is more genre diversity, there are a lot of young female performers' names, relatively more songs in Latvian," she adds. A wide range of genres include traditional pop music, schlager, metal and joke songs.

On 13 December the first round of the selection was completed with 28 of 126 songs shortlisted to continue to the auditions round. First songs were rated in audio listening, with jury having no information on the artists or songwriters. The Jury was evaluating the entries at their own professional discretion, taking into account the following criteria: The structure of the song - originality, arrangement, message, correspondence to modern market trends; Songs and participant opportunities and potential to compete on the international pop music market; Performer's vocal skills and personality; Past performances in the industry or potential for future success on the real market, as well as the ability to define your own goals, will be considered an asset. Songs will be released to public in January.

On 16 January Latvian Television has announced finalists of Supernova 2020 contest for Latvian songwriters and performers. On February 8, Samanta Tīna, Edgars Kreilis, Katrīna Dimanta, Miks Dukurs, ANNNA, Bad Habits, DRIKSNA, Katrīna Bindere and Seleste will compete in the only live show for the right to represent Latvia at the 65th Eurovision Song Contest in Rotterdam, the Netherlands. The finalists of the competition were selected by an international jury of 26 participants, who included music, music management and media professionals, communications professionals, as well as organizers of the contest from Latvian Television. In evaluating the applicants, the jury took into account a number of factors - the originality and structure of the song, music, lyrics, vocal skills and abilities of the performer, and the potential to compete in the international market and on the Eurovision big stage. It also took into account data analysis of views and likes on the YouTube platform, which reflects the evaluation of the 26 potential songs by the public. In addition to the eight finalists, the jury gave the new performer Seleste the chance to take part in the Supernova final this year. "It is important for the competition that there are young, capable and courageous artists who dream of the big stage and have no prejudice against this competition. Seleste showed herself very well in the selection, this is her first song written, and we hope this will give her and other young artists the impetus they need to achieve their goals, "said Ilze Jansone, Supernova 2020 producer. "There will be only one live broadcast this year and it will be the final right away. So there's only one chance for everyone to decide who will represent Latvia in Rotterdam in May, "said Ilze Jansone. 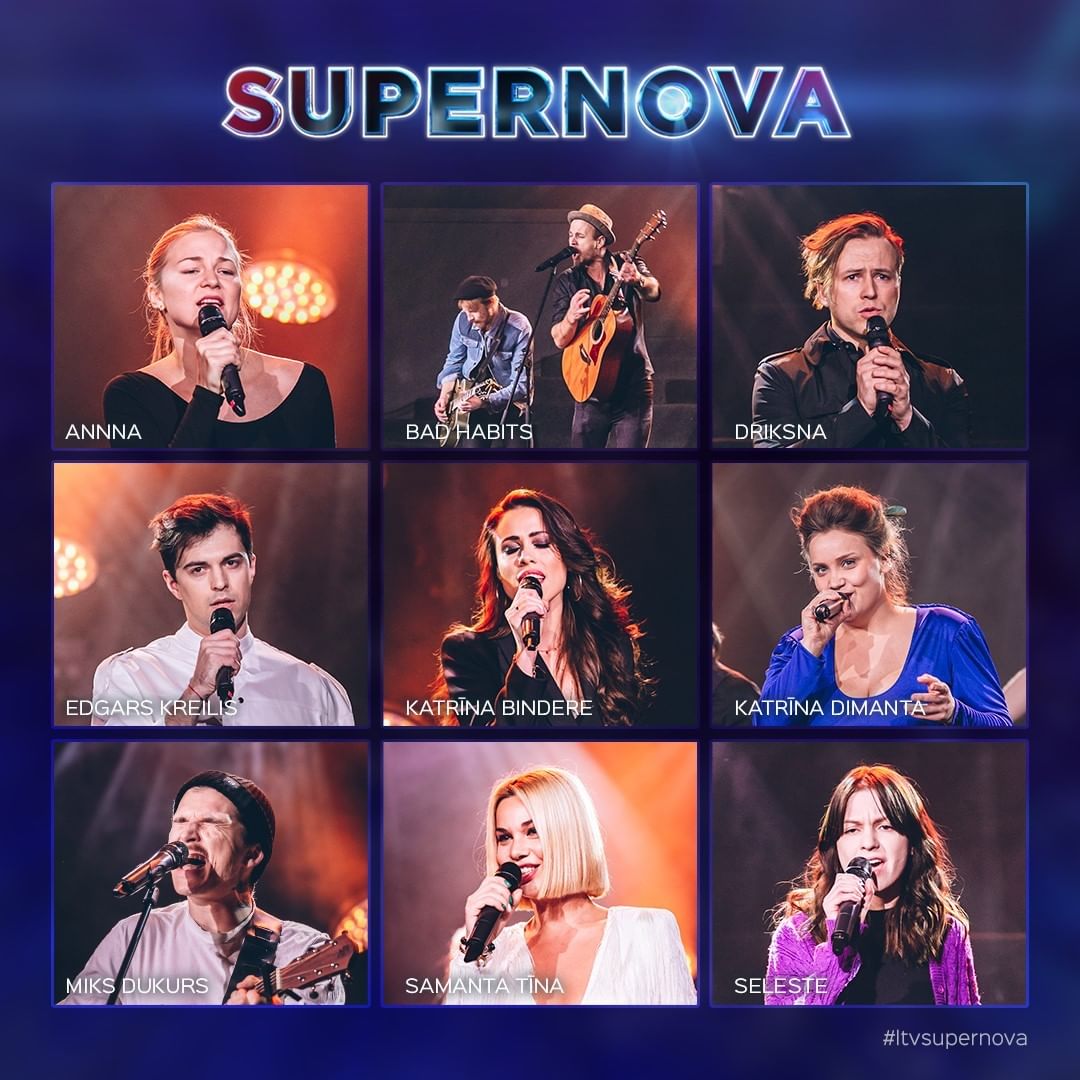 Singer Katrīna Bindere, who has developed her vocal skills by singing in several choirs, participating in musical masterclasses and competitions, co-wrote the song "I Will Break Your Heart" with Jānis Driksna and Niklāvs Sekčs at the RIGaLIVE Creative Camp. It tells the dark side of mad love and passionate feelings.

Samanta Tīna competes with the song "I'm Still Breathing," which tells about the inexorable power of a woman while drawing attention to the stereotypes of women in society. "We need to be ideal mothers, wives, mistresses and successful career players with big future plans for professional growth. You also need to be able to be masculine at times to stay true to yourself, your loved ones and your dreams, to maintain a perfect look, and to be able to take care of everyone around you. It's one big system with a lot of responsibilities that doesn't give you any discounts! "she says.

Singer Edgars Kreilis co-wrote the song "Tridymite" with Ingars Viļums, a member of the band "Brainstorm". The multi-faceted crystal tridymite mentioned in the title of the song symbolizes the unknown and inexplicable formula of love. Who can beat the energy when two people's eyes meet for a moment and the inexplicable happens?

Musician and composer Katrīna Dimanta grew up in a family of seven singing children. The song "Heart Beats" was created at the charity fund "Līdzskaņa" creative camp. It tells the story of a girl who, in the early hours of the morning, unexpectedly meets an old love in the streets of the city that makes her heart beat faster.

ANNNA is a 25 year old songwriter, producer and performer who grew up in Saulkrasti but has been living in Amsterdam for over five years. The song "Polyester" ironically portrays a theme close to the singer - "fast fashion" - and its devastating environmental impact. On January 17, ANNNA will represent Latvia at the Eurosonic International Music Exhibition Festival in the Netherlands.

Singer and singer Jānis Driksna started his solo career with MyRadiant You, but in Supernova 2020 he will perform solo as DRIKSNA. The song "Stay" tells you about the one thing that neither time nor distance can erase from your heart. What if life and every direction it takes get in the way and prevent it from being together?

Miks Dukurs is a singer, lyricist and composer who also produces his own music. The song "I'm Falling For You" tells the story of love that never ends, and feelings that extend far beyond this world.

Seleste is a 17-year-old Riga student studying at the Riga Culture High School, playing guitar and playing music. The song "Like Me" is her first song written, which encourages not to be afraid to fall out of the gray mass and to show her personality and strangeness.