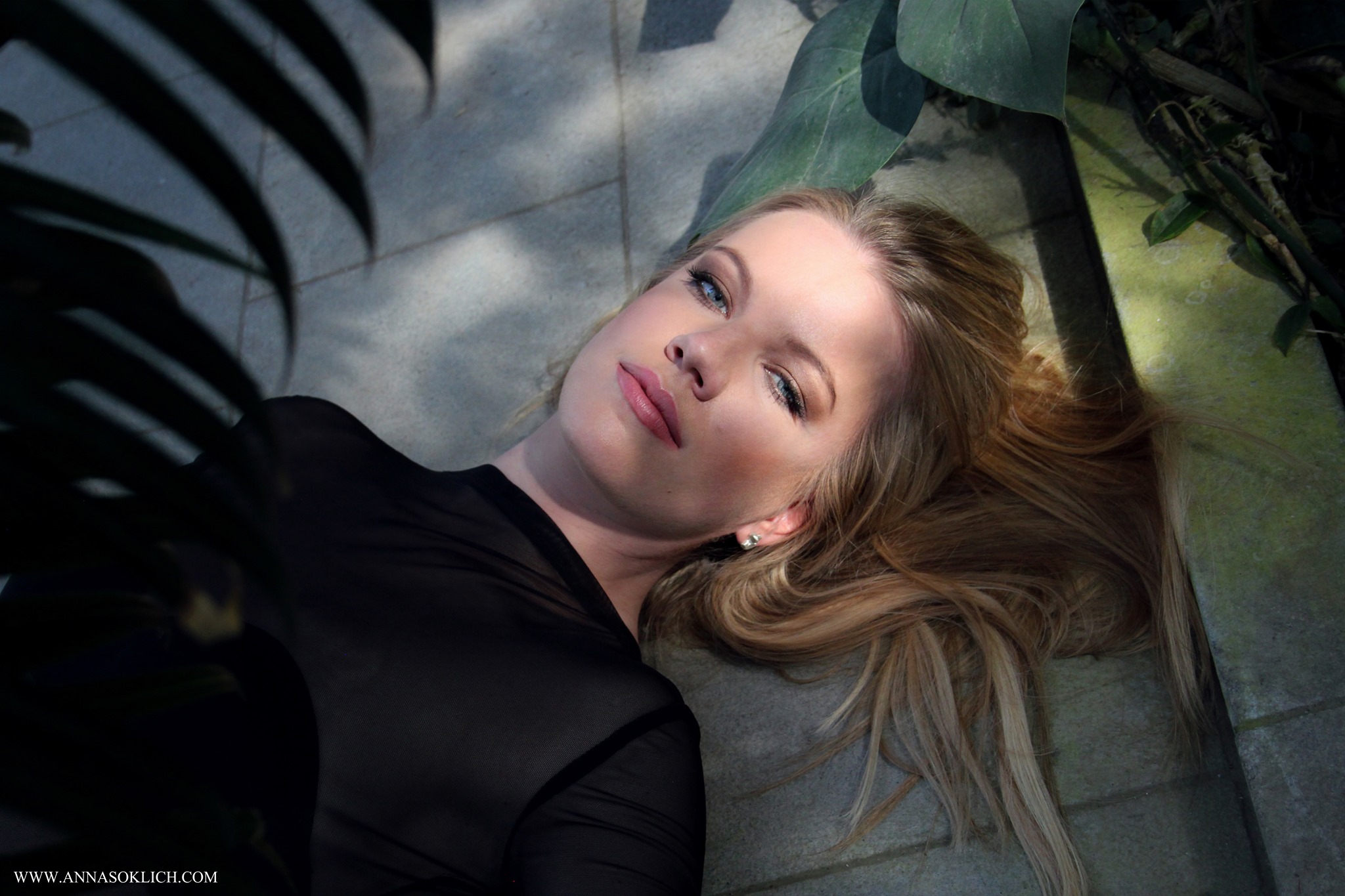 She has been writing her music since the age of eighteen. Soklič twice performed at the Slovenian Eurovision Song Contest preselection EMA as part of the alternative rock band Diona Dimm with "If You" in 2004 and "Oče" in 2007. Band had a 3-year contract with the Swedish publishing company TMC, which expired in 2011. As part of the collaboration with this record label, the band produced an album, "Drama Fatale", which was not released officially, but was used solely for promotional purposes.

In 2014, she sold a solo concert at the Veneto Jazz Festival in Venice. In 2017, she toured in Dubai, Naples, Monaco and performed with her own compositions along with the Symphony Orchestra at the Alpe Adria amphitheater (Lignano Sabbiadoro). She also sang with the famous gospel choir from New York (Harlem Gospel Choir), which had sung for Barrack Obama, the Pope and performed together with U2, Elton John, Mary J. Blige, among many other artists. Soklič also had solo concert in Zagreb with the Big Band of HRT last December.

He has performed with the RTV Slovenia Dance and Symphony Orchestra, as well as several concerts in a smaller band. In her repertoire, we find big names in the fields of jazz, soul, blues, music that "tells". She does not underestimate the pop, which she believes, just like other genres, demands and allows the vocalist a meaningful and engaging interpretation. "As a songwriter, I want to go to places people don’t expect and with that is complete freedom of expression."

She has participated three times in Slovenska popevka, where in 2019 she received two professional jury awards, the Best Interpretation Award and the Best Overall Song, for the song "Temni svet". She has also performed with the Symphony Orchestra at numerous festivals and television shows.

Slovenian national preselection EMA 2020 will run in two stages: Newcomers (Category A) and established performers (category B). Entries from the Newcomers category, will compete against each other in the online competition EMA FREŠ. Two best songs from the Newcomer category will join selected songs from the established category in the continuation of the selection and together they will be featured in the main EMA 2020 competition.

Participating artists must be at least 16 years old on February 1, 2020. The lead artist, or at least half of the main performers in the groups, must be citizen or residents of Slovenia. All participating songs must be original and unreleased. Participants in Newcomers category should be up to 25 years old who have commercially released not more than 3 songs on February 1, 2020. Submission process is open from 1 August 2019 to 19 September 2019. Established artists have extended deadline until 18 November. Entries are submitted online: song in mp3 format, lyrics, photo of the artist, biography, completed and signed statement, for Newcomers are also required 1-minute video of live performance and 30-second video presentation of the act. In addition to the received entries, RTV Slovenia reserves the right to invite any person to participate directly.

On 21 October, RTVSLO has announced that 18 songs have been selected to compete in five week long competition EMA FREŠ, which will start on 4 November and will result in selection of two acts for the main EMA 2020. The first phase of the selection will be led by five commentators: Joker Out singer Bojan Cvjetićanin, presenter and animator Klemen Kopina, journalist and Eurovision expert Denis Živcec, and online "influencers" Maja Pinterič and Rebeka Tomc. Two acts will be presented each week from Monday to Wednesday, and through an online survey, voters will determine one each day to qualify for Friday's week final, where two winners will be chosen - one by online voting, and another by an expert panel. Each voting runs from 10:00 to 20:00 CET. Of the 18 performers, 6 will qualify to the finals of Ema Freš in the first three weeks. 12 loosing acts will compete in two weeks repechage, with 4 more qualifying to the finals. More than 30,000 votes were received as part of an online vote where only one vote vote per IP address was allowed.

10 EMA FREŠ finalists will compete in a televised final on 18 January, where songs could be heard in full and new versions (30-second extracts of new versions were published on 7 January). They will fight for two places in the main EMA 2020 - one chosen by voters and other - by a three-member jury. EMA Freš final will be hosted by Maja Pinterič and Bojan Cvjetićanin. Guest acts for the show: Fed Horses, Lumberjack and Raiven.

"I feel down-to-earth and very grateful that people have seen such potential in us. We have presented a song that is the fruit of our creativity and the fact that people may be ready to send us even to the Eurovision stage is indescribable," said the singer of Parvani Violet Veronika Steiner. "I think we have a slight advantage over the other contestants at this year's EMA, ​​as we got rid of that first scare when you first present your song to the wide public. Now we know how it will go and what needs to be paid attention to," Steiner adds. "The feelings are fantastic. Being a singer and performing at EMA was my childhood dream, but later it became a wish and a goal, but now that has happened," explains second finalist Saška Matajic.

List of EMA direct finalists has been revealed on 20 December. The three-member panel, composed of musician Raiven, head of the publishing business of ZKP RTV SLO Mojca Menart and music editor of Val 202 Jernej Vene, selected the entries from 74 applications received. EMA 2020 will be held on 22 February 2020 in Studio 1 of Television Slovenia. At EMA 2020, the voting system will be the same as last time. After presenting all the tracks, a three-member jury will select two superfinalists to present themselves once again. And only TV viewers will choose the winner.

Klemen Slakonja is returning as the host of EMA having hosted the event three times previously in 2011, 2012 and 2016. The evening before the final there will also be broadcast of preview show Ema pred Emo. It will give viewers a glimpse into the backstage of preparations for the big music event on Friday night, check the pulse at the rehearsals and the expectations of the contestants.

Week 1: 4-8 November
Stella VS Pia Nina
Soulution VS Younite
Astrid in Avantgarden VS Martina
Final: Stella VS Younite VS Martina 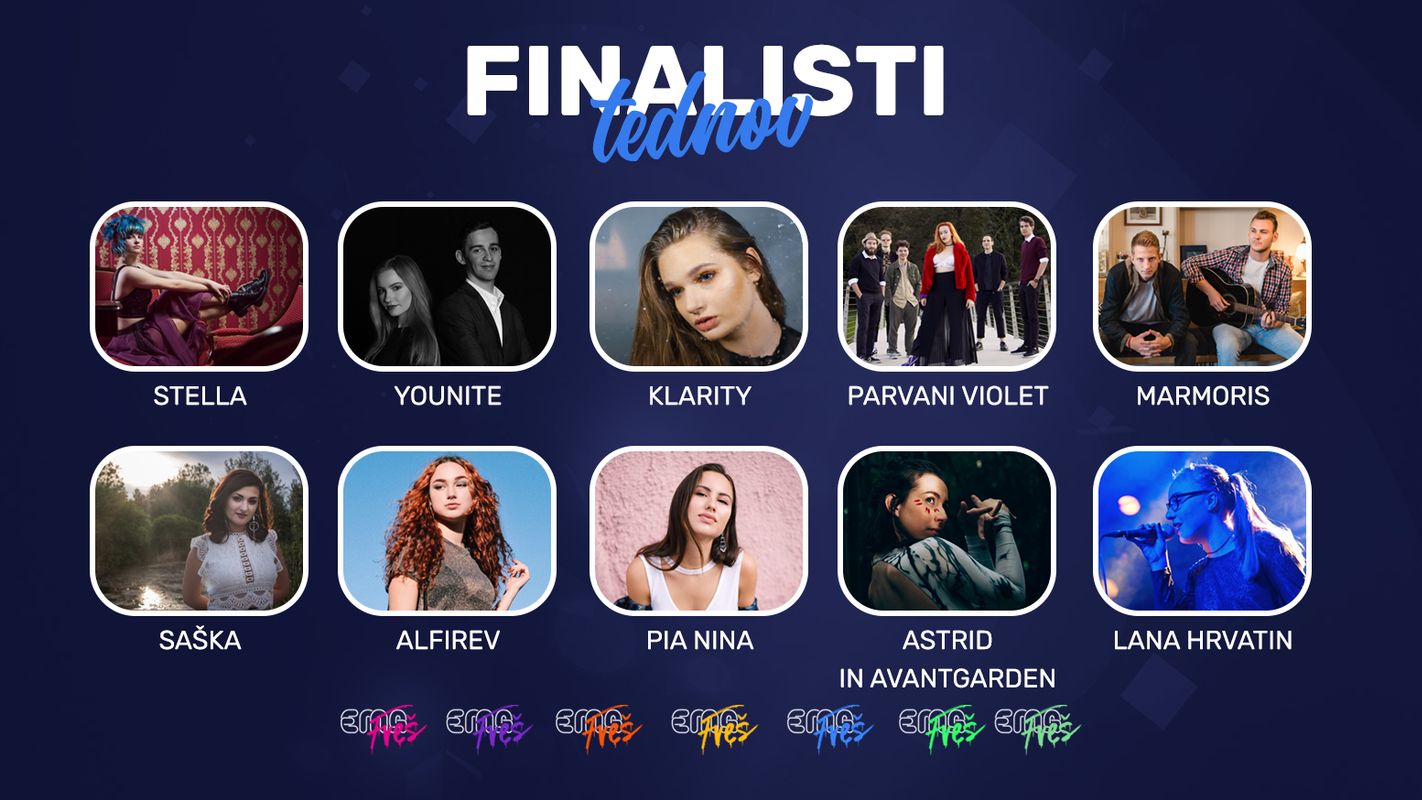 Неделя 1: 4-8 ноября
Stella VS Pia Nina
Soulution VS Younite
Astrid in Avantgarden VS Martina
Финал: Stella VS Younite VS Martina