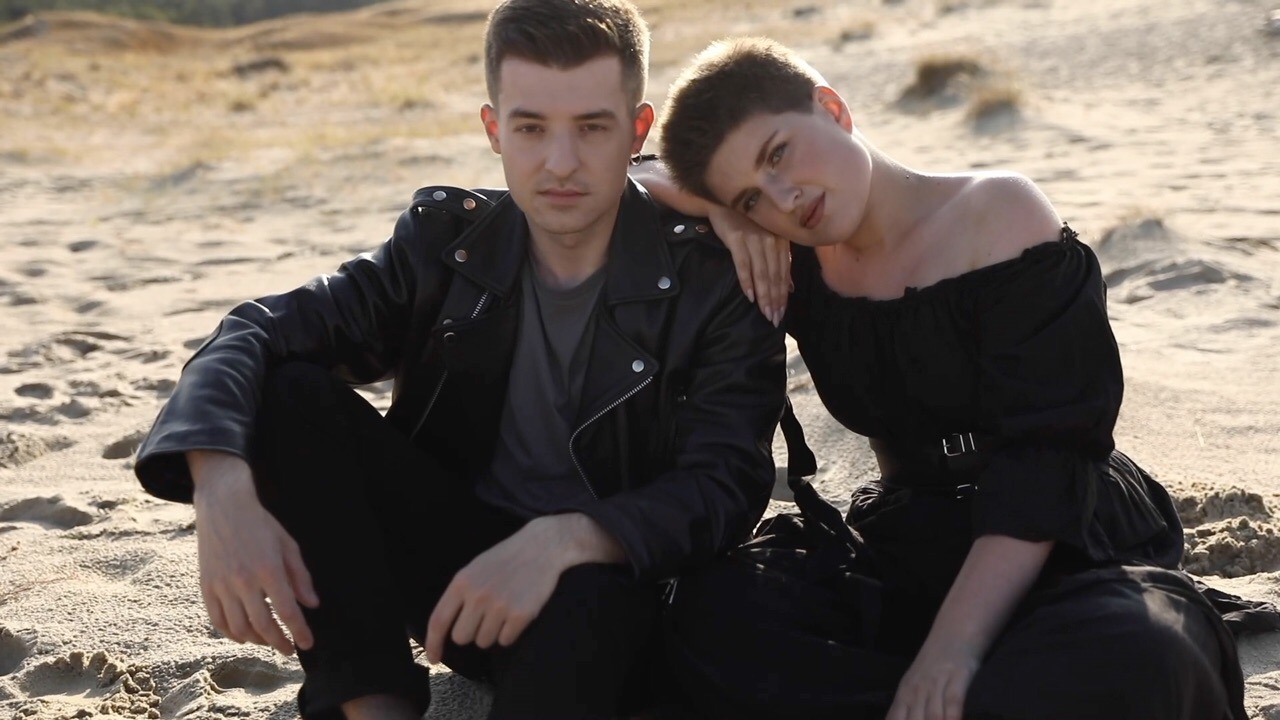 VAL is a young electronic project from Belarus, its members both are 24 years old. Inspired by the new and relevant trends of modern music, VAL is not afraid to leave the comfort zone, seeks to expand the scope of the possible and provide new emotions to the audience. The VAL project was founded at the beginning of 2016 by vocalist Valerie Gribusova (Valeryja Hrybusava) and musician and sound producer Vladislav Pashkevich (Uladzislaŭ Paškievič), whom mutual friends-musicians introduced to each other in 2015. Experimenting with genres such as house, R’n’B, pop, hip-hop, along with vogue dancing and fashion, made VAL find its niche since their first single "Kto ty est'", released on May 1, 2016, in September 2016 the second single "Veter vo sne" was released, on which a music video was presented on January 1, 2017. On May 1, 2017 EP "V moey komnate" was released. In 2018, the single "Posledstviya" followed, and in 2019 - "Tikhaya gavan'". In 4 years, VAL released one EP, 2 music videos, 5 singles, one feat, played twice as a warm-up for CREAM SODA band, singer Zivert and electronic Lithuanian duo BEISSOUL & EINIUS, as well as got a remix pack for their tracks made by the guys from BASSOTA.

Valerie Gribusova was born on February 12, 1995 in the Republic of Belarus, the city of Mogilyov. From 5 to 10 years old she studied in the folk music ensemble "Yarytsa" of the Mogilyov Regional Center for Creativity. In 2005, she entered the Mogilyov State Gymnasium College of Arts in the Department of Conducting (academic vocals), which she graduated from in 2013 with honors. For 8 years she was a soloist in a pop studio at the Moscow State Pedagogical Institute. From 2010-2011, she studied at the Sergey Nagorny Fashion Studio and took a course in the following disciplines: acting, choreography, fashion, etiquette, hairdressing, cosmetology, and photo art. In 2013, she entered the Belarusian State University of Culture and Arts at the Faculty of Musical Arts, specializing in Variety Art (Singing). Since August 2013, she has been a soloist of the National Academic Orchestra of Symphonic and Variety Music of the Republic of Belarus, conducted by Mikhail Finberg. In June 2016, she became the winner of the Grand Prix and laureate of the Fund of the President of the Republic of Belarus for Support of the Talented Youth.

"Da vidna" (Until Dawn) - is our first song in Belarusian, it is beautiful when the country carries its own culture to the world. This is the story of a girl who was given by her parents to marry against her will. But as they say, you can not command the heart. And what happens from morning till dawn will remain a mystery to everyone"

On December 31, the Belteleradiocompany has launched submission period for the participation in the national selection round of the Eurovision 2020 song contest. Applications can be submitted online until January 17, 2020. Citizens and residents of the Republic of Belarus are allowed to participate as the performers, at the filing date of the application they should have reached 16 years of age. A song (music, lyrics, arrangement) that has not been commercially released, and also performed publicly before September 1, 2019, including distribution via the Internet, can participate in the preselection. The application package includes: information about the artist, song in mp3 format and instrumental, lyrics, photographs, copies of documents confirming the ownership of the song, the artist’s consent to participate in the selection. One artist has the right to submit only one application.

In total, 95 applications for participation in the national selection were registered, among them around 30 from foreign performers, who, according to the regulations can not compete this year. After that, the first jury has evaluated entries and formed a list of participants of the live auditions. The list of 49 contestants admitted to the auditions was published on the organizer's website on January 21. The auditions are scheduled for January 27 - following its results, the second jury will determine up to twelve participants of the final of the project (the number of finalists can be changed by the decision of the organizer independently or at the suggestion of the jury). During the audition, the online broadcast will be carried out on the website of the Belteleradiocompany www.tvr.by.

Many candidates tried to conquer the national selection more than once. For "Aura" this attempt is the 12th, for Janet - 8th, for NAPOLI - 7th, Alexey Gross - 6th, Vitaly Voronko and Alen Hit - 5th. Among the participants there are even those who have already stood on the Eurovision stage in previous seasons: Two as backing vocalists and one as a lead singer. Most of the participants are from Minsk. Performers from Grodno, Mogilev, Vitebsk, Baranovichi, Pinsk and Molodechno also came to the audition. In addition, singers from Russia, Cyprus and Ukraine with a residence permit in Belarus took part in the selection. Participants presented compositions in Belarusian, Russian and English. The latter is in the majority - 40 tracks.

Draw of the running order of the final was held on 28 January at the meeting of the finalists and organizers in BTRC at 10:00 CET. Also, a sketch of the design of the stage for the final show was presented.

Final of the preselection will be held on 28 February. According to ATN, this year the final of the national selection of the song contest will not be held at the 600 meters studio of BTRK, but at the Belarusfilm premises. Negotiations between the companies are undergoing, locations are being studied. The final will run in the format of a live television show broadcast on the Belarus 1 and Belarus 24 channels. The show will be hosted by the representative of Belarus at the Junior Eurovision 2017 Helena Meraai and TV host of Belteleradiocompany Yevgeny Perlin. The winner will be determined by the results of voting by a professional jury and TV viewers. If two or more participants in the finals gain an equal number of points, the winner is determined by an additional open jury vote.

The project is carried out by the National State Television and Radio Company of the Republic of Belarus together with the Ministry of Culture of the Republic of Belarus. The costs associated with the participation of the artist in the international contest (creating a phonogram and arrangement, staging a performance, creating stage outfits) are carried out by his management. BTRK pays for expenses related to travel and accommodation of the Belarusian delegation in the contest.