Oto Nemsadze was very impressive in his first rehearsal. He comes back on stage for the 2nd rehearsal for his dramatic "Keep on Going". Everything stays more or less the same as in the first rehearsal. It's a very lyrical performance with the Georgian mountains in the background, a river and a bridge on the LED floor and barbed wire across the video art. Fire, lightning and a lot of national pride. There's a handshake at the hand on the video art that I assume portrays the bond of Georgian and Abkhazian people.

ESCKAZ team has attended concert event of Oto Nemsadze & Shavnabada ensemble which was held in Sports Center "New" of Tel Aviv. Georgian diaspora has been invited to this free concert organized by Georgian embassy in collaboration with Tel Aviv municipality and Oto Nemsadze fan club.

The Georgian delegation has also hosted an event at a local restaurant Kinto owned Maurice Janashvlilli - Georgian Israeli pop star. We hope you enjoy the video and photos from the event 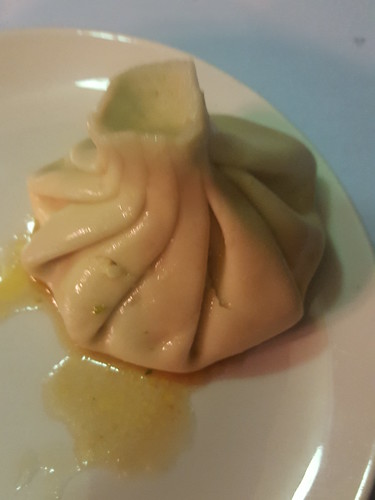 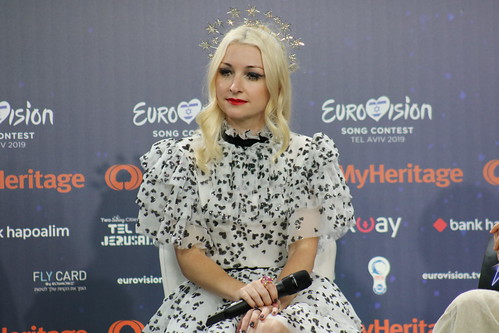 And here's dear Oto sings at the press conference:

Oto goes on stage in a black outfit. The atmosphere is dark and dramatic. The video art starts with snowy mountains and towards the end of the song changes to a burning fire. The floor has a video art of a big river with a narrow bridge oto is walking on. At the last chorus the backing singers march in and Oto looks at them and sings his lungs out. This is a song of pain, struggle and passion, and the live performance designed to transfer those exact feelings. He is an insanely good performer and vocalist. Wish to see him in the finals, but what are the odds?

Tamara is a professional, she sounds good and knows how to work the stage.

Sacha Jean Baptiste was hired to rework the staging from NF and she apparently went for a minimalist approach with this entry.
Perhaps less is more, that is always debatable but in its current form the entry might lack a visual anchor.

Tamara starts in a red cape she takes off after 1st verse, there is some dry ice on the floor. Pyros for the climax.

I have a real soft spot for Georgia, even though It isn't considered as a favourite, much to my surprise.

The camera work of the first verse is a little bit strange, as part of the screen is being mirrored which leads to some very weird body compositions of the band. It reminds me a bit of the camera work France used back in 2008 with Sebastien Tellier. The second time round, the special mirror effect is dropped and it looks so much better.

So not a big fan of that bit, but what follows next is quirky, alternative bright, colourful and full of lights. Just what you need with an alternative song like this.

Many fans have this down at the bottom of their list, but in my opinion, Georgia has everything in power to qualify with much ease.