So all semi-finalists have rehearsed once now. Today we got to see the second half of the second semi-final, starting off with some of the songs that are not viewed as the biggest candidates for the top positions this year. San Marino comes across professional, both singers are good performers but the song is still a big question mark. Croatia was completely over the top, in my opinion it looks great but it's still a very cheesy song, might do better than we all think (and maybe hope?) but it could also be disregarded for being just too much.

When it comes to Norway, Estonia and Lithuania - they gave similar performances to the national final, solid for what it is but maybe not enough to stand out. Disappointments for me were Bulgaria which feels a bit cold but has some really nice graphics and Israel where a lot more can be done with the choreography, as long as the vocals are kept into account as well.

I can't say too much about Switzerland as we have hardly seen it, it's colourful and bright but maybe a bit too much. Then finally to my highlight of today, Belarus. Songwise it stands out for me being sincere, happy, upbeat, warm and it was so much better on stage than I had imagined it would be.

So from tomorrow I will spend a lot of time in the hall as the second rehearsals begin and we can see and hear what it sounds like from there. I'm excited, can't wait so stay tuned for tomorrow!

Some last thoughts on today's first rehearsals. Overall there haven't been that many surprises I think. Everything started and ended perfectly on time.

Obviously a lot was expected from Belgium but I also think that the earlier performances already did a bit to lower those expectations. Georgia and Albania once again delivered great vocals (even though the latter's experiments weren't such a great idea in my opinion). Vocally Australia was also really good but his face all over the screens is a bit much for me.

That leaves Finland and Sweden who hardly changed anything to their performance and did a really good job, especially considering it's just a first rehearsal. Montenegro was the most extravagant act of the day and I would've been surprised with anything else. It also really stand out with its draw. Last but not least Portugal, I find it hard to say something about it as another singer can leave a completely different impression. I think it will be mesmerising on the night, especially if flags don't ruin the view as they kinda did with the Dutch performance of 2013 (Anouk - Birds).

So on to tomorrow where we will see the last songs from the first semi. I think there's a lot to look forward to. A few of them have been around quite a lot with promo-tour performances but for others like Greece and Armenia it will be really interesting to see the staging as they either were hardly performed live or didn't really show a lot in the previous performances. I'm also quite looking forward to Iceland. Before the national final it was quite the favourite already, then many people were disappointed but with a different staging that might all change again. And then there's Moldova, obviously not the masterpiece of the year but one of the songs that always gets me in a good mood, so I can't wait!

All in all another exciting waiting for us, see you tomorrow!

Semi One is History, time for Semi Two!

Greetings from me as well from the After-Day of Semi One! I have to say I wasn't really surprised by the result which was generally fair . Got 9 qualifiers right yesterday, had Denmark to go through and Albania to miss out. I guess Denmark was punished for following the same recipe this year, hope that that may shake things up and see a more interesting selection from them next year...As for Albania...well, there's always place for surprises.

So...Semi One is history,now it's time for Semi Two...the first Dress Rehearsal is starting as we speak and watching it from the Press Centre. I won't be making long threads with descriptions today, after all you've watched and read about the performances many times...i'll try to give a very short review at the end of the Rehearsal about the impression and the feeling I got from each entry.

If you're just getting up today, why not to check our daily review with ESCKAZ's Andy, Dimi and Alexandra and specially invited Melodifestivalen expert Jevgenijs. There was unanimous and somewhat surprising winner of our review panel this day.

While some members of our team headed to Bratislava, I decided to have a nice walk around Vienna. I was also thinking to hire a bike but unfortunately they were all unavailable as too many people were using them at the moment.

So, I stopped at Stephanplatz – the main square. It is named after its most prominent building, the Stephansdom, Vienna's cathedral and one of the tallest churches in the world. It’s combination of a medieval cathedral and glass and steel building.

Then I was thinking to do some shopping but unfortunately again every single shop was closed. So, I did window shopping instead )
I didn’t have a plan were to go and I ended up at the Vienna Opera where they usually show opera on a big screen in the streets.

On my way I found a Monument against War and fascism. It’s an impressive monument that won’t leave you indifferent or apathetic. Not only you look at the monument but there is a special sound coming out from the monument that makes the right atmosphere.

I walked through the Spanish Riding School were I could have a look at purebred horses from a distance.
Later I came across the ruins preserved from the time of Romans till the late 19th century.

As I was rushing to the press centre to see the opening ceremony I don't have anything else to share with you tonight.

Today Misha and I visited the ESC winner bridge that was specially designed and constructed to celebrate the 60th anniversary of Eurovision Song Contest. It spans all way over Danube river. There you will find all the ESC winners from the beginning, starting with Lys Assia in 1956 and finishing with Conchita Wurst in 2014. There is even a space reserved this year winner.

Soon Misha will upload a very interesting video commenting on all the winners of each year telling you a bit of a history and refreshing your memories from the previous years. For now on, enjoy some photos of mine. 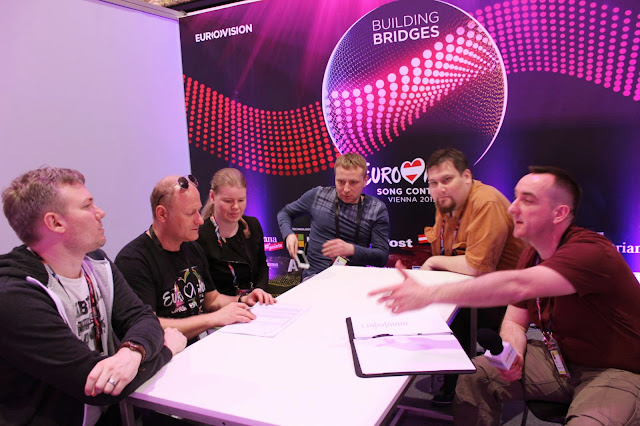