In addition to rehearsals, press-conferences and interviews it’s time to say something about the host city of 2018th edition of the Eurovision. We were very priveleged to be invited at the special press-trip around Lisbon yesterday organized by AMP Associates. In brief we consider this as the biggest highlight moment of our stay in Lisbon so far.

The tour started at Joana Vasconcelos Studio - famous Portuguese artist and designer known all around the world. Her exhibitions are held in different countries with huge success. In 2009 there was an exhibition even in Moscow. Joana’s studio is located at Lisbon promenade and occupies 3 floors, where a lot of people work - starting from designers to seamstress.

After that we moved to the MAAT museum - a future location of the Blue Carpet event and the opening ceremony. This is a museum of art, architecture and technology. At that time there was an exhibition about future of humanity.

Then we went to the first lunch at the Watt restaurant, which is located in the center of the city. The restaurant chef been not just only an owner, but also he is a father to 4 kids and he is also a famous person in Portugal and beyond. He uses only ecologically clean products for his cookings.

After lunch we had a trip on the famous 28th tram. We went to the one of the biggest cathedrals in Lisbon, and after that we walked by foot to the restaurant called Associação do Fado Casto. In that place we have witnessed a little fado concert by Teresinha Landeiro.

Last place we visited was famous restaurant in Lisbon.

It was a great opportunity to learn more about the city and if you'd like to join us in this experience, watch the video below:

As there are new rules this year, and a total of 2 minutes of rehearsals may be used in any one day why not check out some of the artists who performed on the promo tour in these playlists

First photos from the 2018 press centre 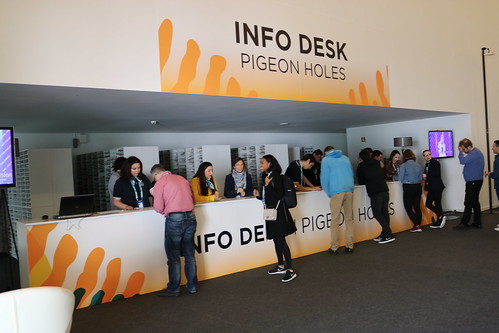 Day one is always a little difficult - we know this from years of attending - but we were really surprised at just how taxing some of the issues could be. First the terrible weather when queuing this morning was a real let down, and they would not open the security tent area even 10 minutes early so that the 60+ press people could at least shelter

Eventually when it was opened there were issues with all the "P" accreditation passes not functioning, which meant manually checking the whole queue and their passes. Not a great start.

That aside we entered the press centre with an open mind and first task of the day was preparing the interview lists. Always a huge drama for us to deal with - and this year was no different. Several hours - or at least it felt like it - later the first lists started to appear....oh well

The press centre itself is a story in itself - the working area, the press conference area and the interview rooms are all separated by some distance....we will see how this plays out later today. Additionally the press working area is probably the smallest I have seen ever. There will be a shortage of desks much later this week. It's already pretty full on day one

On positive notes the on screen rehearsals started on time, we had sound, and we had wifi!!!

More news coming up later when we settle in a little

ESCKAZ team english review of all the songs

The English side of the ESCKAZ.com team reviewed all the songs last night in a two part podcast. In a slightly different version from the Russian speakers the team, joined by Andrew Webster from Slovenia and one colleague from the Russian side, Sergej, the team listened to all the songs, with accompanying alcohol, and gave their honest opinions on each in turn.
Clip is split into two parts, there are some things there we know fans will hate, and some we know that fans will love - it's a personal taste thing really. Hope you enjoy and fell free to comment

In an unannounced new move yesterday, the EBU and RTP, in conjunction with accreditation provider Accredion have published new rules concerning access rights and what media can and cannot use in regard to performance clips filmed during open rehearsals

At ESCKAZ.com we have long advocated a cessation to these clips being prepared and published, and have only continued to do so as the reduction in statistics would mean we would lose almost all accreditations and be unable to bring you blogging, press conferences, reports from the parties, eurovillage and euroclub, and interviews with the artists. So while we welcome and embrace these new rules we are cautious of their sudden appearance 48 hours before live rehearsals start.

No material from rehearsals - either photos or video - maybe be released to personal social media accounts from members of the press. Material maybe be released to company social media accounts but subject to restrictions
Media which are EBU members are permitted to use up to three (3) minutes from the rehearsal content per day. Non EBU members may use up to two (2) minutes per day.
Post contest it would appear that material maybe released in full - but we will try to clarify this
There is little or no information of how many photographs maybe be published or used
The use of the Press Conference Material and of the Opening Ceremony Material is unrestricted.

We are actively seeking answers from the EBU/RTP on what we may or may not do with any material we have collected after the dates indicated in the new rules - which correspond to the the end of the shows. We will bring you this information as and when we have it

These new rules are published on Eurovision.tv and given to all press members as they collect accreditation passes.

Therefore this year ESCKAZ.com will only bring you very limited footage from the rehearsals - not something we are unhappy about if truth be told - but will of course bring you all our usual coverage from Press Conferences, Interviews, live reaction videos as the rehearsals are seen in the press centre, reports from Delegation parties, Euroclub, Eurovillage, blogging and finally as many photos as we can get for all the fans to see.