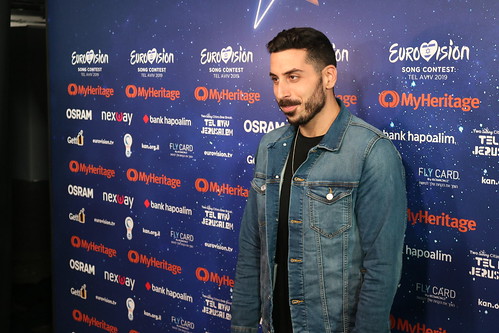 Mahmood took the stage for the first time. With him 3 dancers. The colors on the screen and stage are mostly dark blue and red. The backdrop shows images of people from the video clip, including the child. Some sentences from the song appear in English at the backdrop (hey, it worked for them last year). Mahmood wears a nude colored buttoned-up shirt with some print on it. His dynamics with the dancers are good, but it's not the most effective stage I've seen this year. Oh, and there's an image of burning money and the words "Money Can't Buy You Love". It's a strong message that can speak to a lot of people, but how will European react to Urban trap?

Goosebumps all over here for me. Despite - or maybe thanks to - the projections of the lyrics not being visible in the hall except for the screens hanging everywhere, the performance comes across as very powerful. Vocally both are very good and the song stands out as well for me. Love this.

Quite a big reaction in the press hall after the first run from Italy. Fabrizio and Ermal don't seem to be wearing their stage outfits yet. Their staging is mostly red and they have kept the concept of the video clip with (parts of) the lyrics on screen in many languages. For most of the song the two stand in the middle of the stage with the lyrics projected in different angles, but during the bridge they split up and each walk to one side where they stand on the bridges, to meet each other for the last lines of the song.

The camerawork looks pretty solid for a first rehearsal and so are their vocals.

Italy 1st rehearsal. On-screen lyrics in a dozen foreign languages. One for the linguists. #eurovision

Ermal slightly off-key in the first run. Performance ends on the catwalk.

The hall has never been as full as during this rehearsal but that is nothing to be surprised about of course. It all seems to come together a lot more for Italy this second time that they're on stage. Vocally he didn't make much of an effort the first time, but with the second run it sounded a lot better.

The camera work has also been sorted out so Italy is definitely still a favourite...

The camera angles are better for Italy today. And it's a very colourful visual treat.
Francesco is vocally a little bit all over the place today, but we know he can sing, so one shouldn't read too much into this rehearsal.
He is moving a lot around the stage, the gorilla appears and the song and staging provides real party atmosphere. I'm not quite sure yet, if he is winning it all.