Thanks, Kyiv, and see you in Lisbon next year!

The Eurovision 2017 is over. Thanks to all team members and contributors who worked hard to provide the most comprehensive coverage of the contest in the web. As usual, we were the only media that has provide throughout coverage of the events not only in the press-center, but in the Euroclub, Eurovillage, national parties and receptions as well as fan zones. And first of all thanks to our readers, without whom we would have been unable to exist.

Despite various difficulties Ukraine managed to pull good organization of the contest, which although can't be compared with the great Stockholm and Vienna has been on par with 2012-2014 years.

A highlight of the event was Eurovillage - we have never yet seen so packed Eurovillage with various activities and concerts, add that 5 hospitality zones made up by Kyiv city - so locals must have enjoyed the contest greatly. A slight downside perhaps has been difficulty to get hour by hour schedule of the Village and Fan zones to follow.

Euroclub, while starting on a low note, eventually was transforming into a nice location. Still, the idea to sell openly passes to the Euroclub (not speaking about loads of people appearing there even without any passes) is definitely not doing any benefits to delegations being interested to be present there and perhaps it is time to return Euroclub to the original concept of a night location of the accredited people only, at the same time offering night-time Euro Fan Cafe or other clubs as venues to non-accredited fans.

Red Carpet has been OKish, even though perhaps very few people from press and delegations understand what is the real need in this event, especially when the access of non-accredited fans to it has been largely limited for the security reasons. The country-zones obviously have not worked at all, and length of the carpet can't be considered a good thing as well.

The events schedule during the week in Kyiv hasn't been extremely exciting, still offering something to everyone, and for example I have visits to Sing, Lola, Sing musical with amazing Oksana Zhdanova, play of my favourite actor Alexey Gorbunov, performance of Ultramarine Girls cover band with Galina Scoda as three event highlights of the week.

Press-center has been very convenient to work and besides few issues which were addressed and solved immediately our home for 2 weeks has been very friendly. I have nothing bad to say about team of volunteers this year, who have been largely unnoticeable - which is the most essential feature for volunteers, they should help when approached and not to interfere in the work. Security has been most friendly and approached everyone with a smile, and considering high security alert during the contest, it ensure a feeling of safety.

Now it is time for us to take a rest after a very long season that has started for us already in summer with coverage of Ukraine's preparations. ESCKAZ will be back to the coverage of Portuguese preparations in winter.

Finally, you can check again our coverage (675 produced videos) in several playlists:

Well it's Bulgaria's to lose really

But still hoping for Italy to win

Some of Eurovision fans may remember Galina Scoda - participant of Moldovan 2008-2010 national preselections with such songs like "Your Own Vision", "Joc De Noroc" and "Actori".

Since 2010 Galina has moved to Ukraine, where she starred in various plays of Musical Theater "Comme il faut".

Since 2010 she sings in cover band "Some like it hot", which has in 2014 been renamed into "Ultramarine Girls"

This year, Scoda has completed in the Ukrainian version of The Voice.

Attempting to cover everything Eurovision related, ESCKAZ could not miss performance of Galina Scoda and Ultramarine Girls (Maria Sorokina, drums, Marta Kovalchuk, bass, Uliana Guda, keyboards). We were looking for suitable dates throughout the week and eventually managed to catch them in Solod enjoy bar.

Having a brief chat with Galina after the performance, we have let her know she is being missed in the Eurovision world and we would be happy to see her again running in the national preselection in Ukraine or Moldova. Hopefully, composers and producers pay attention to her fantastic abilities. Band's website: https://ultramarinegirlsband.com/

Poland: Kasia holding the last note especially long today to leave a mark with the juries.

Belarus: NAVI as before, energetic and good chemistry.

Armenia: Artsvik sells 'Fly With Me' as she always does: Excellent!

The Netherlands: OG3NE should be very happy with their jury performance. The Dutch journalists in the press centre are too.

Moldova: One of the bridesmaids' costumes didn't unfold. Other than that perfectly fine performance.

Hungary: Joci with a good performance.

Denmark: Anja looks comfortable on stage and nails the vocals without any problems.

Croatia: Jacques with two strong vocal performances and some ad-libbing to impress the juries.

Australia: Isaiah plays it much safer today and sounds better than in Tuesday's semi.

Greece: Demy with a charming performance supported by backing vocalists through the challenging chorus' harmonies.

Norway: Has improved from the semi final form.

UK: Lucie with strong vocals and lots of passion.

Cyprus: Hovig as he has been in the semi final. Solid.

Romania: Good performance from the duo.

Germany: Levina gives a lot of smiles for the juries and shows progress from earlier.

Ukraine: The host nation can be very proud with their jury performance.

Sweden: Robin had better performances. But it was very slick!

Bulgaria: Kristian with a strong emotive performance for juries.

France: Alma with a confident and uplifiting performance for the juries. 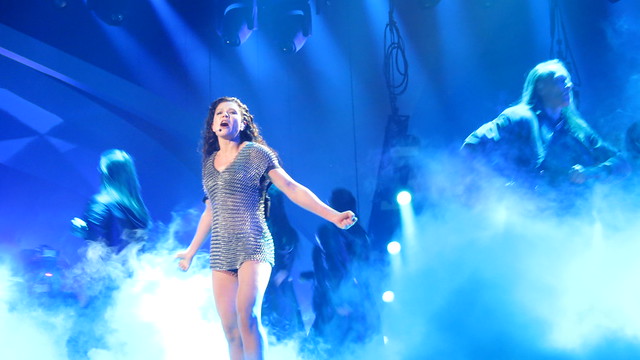 In about 10 minutes the first dress rehearsal of the grand final will start where we will hear all songs in the new running order for the first time.

Of course I'm here to liveblog it, so stay tuned!

We've started with a 10 minutes delay, as far as I can hear. Unfortunately there's not much I can tell yet about the opening act, as we have no feed from the hall at this moment. Let's hope it changes soon...

OK, so we got to see only a little from it, but I can tell now that we start with all artists being announced and coming on stage.

And we're off to song 1 after a few delays.
1 Israel
Imri was the last to perform yesterday and the first to perform today. He's doing a good job, vocally not completely perfect but after such an exciting night I wouldn't read too much into it.

2 Poland
Kasia seems to be wearing a different dress today, or maybe just a shirt over her dress. It's not very flattering. Vocally she's excellent as always, even though the last notes didn't seem to go quite the way they're meant to.

4 Austria
Also Nathan is charming and relaxed as always.

6. The Netherlands
At least everyone who wants to vote for the Netherlands doesn't have to remember a new number as they're back on #6... There seemed to be some issues with the camera work now, otherwise excellent performance.

After six songs it's time for a break, very short where the hosts stand on the satellite stage.

7. Moldova
It's still as cheerful and well sung as always, but one of the backings doesn't manage to unveil her skirt . It has happened before, will it happen again?

8. Hungary
Joci Pápai seems to need a bit of time to recover his full vocal strength after yesterday evening. Not a bad performance, but he has done better.

9. Italy
Francesco Gabbani and his gorilla haven't dressed up yet for this rehearsal, but he's showing his full vocal strength now.

10. Denmark
Anja's squeezed in between the two biggest favourites of the night, Italy and Portugal who will be next. She doesn't seem affected by it at all as she delivers as always.

11 Portugal
Salvador's freestyling again! Hand trumpets inclusive.. vocally he sounds great. He knows what he has to do though.. let's see what he does tonight and tomorrow! He mentions at the end that he hopes to resist the urge to sing it differently each time..

A small break again while the stage is set up for Azerbaijan. In the meantime the hosts talk to fans in the hall.

12 Azerbaijan
A strong performance from Dihaj and her backings. The first part in the box still looks great as always.

13 Croatia
Time for our second duo of the evening, well, kind of.. Jacques had to cough before performing, something that would better not happen on the big night, or even tonight in the juryfinal, but after that he starts and performs as if nothing happened. He is saving his voice in the last chorus, avoiding the high notes in the English part of the chorus.

14 Australia
Some days of rest seem to have done well for Isaiah. He gives away a good performance.

Another break, this time in the greenroom and a video to announce the Eurovision Choir of the Year that will take place in Latvia in July this year.

15 Greece
While on Monday and Tuesday Demi didn't sing the high note in the chorus, this time she does. The backing vocals are gone, and no need for them either. During the last part of the song they seem to be there again, but a lot more subtle than before. Good performance.

16 Spain
No changes to this performance. Vocally still a bit shaky from time to time.

According to the betting markets these 10 are the qualifiers from Semi Final 2. On Tuesday they were wrong on Finland, so keep in mind they don't always get things right.