Well the most important tasks for me, always, on day one is to actually get into the press centre in good time, and hunt the interview lists. So The Boss and I duly arrived at around 7.45 in the morning to make sure we were in a reasonable place in the queue to get in - first!

The only real issue we had with this was that actually entering the building ended up being so confusing, with two queues (one for S accreditations and on for P) but in the end it all worked out as we were the first to get in. Which leads onto task two. Hunt the interview lists. This is a huge thing for me each and every year, there are never lists prepared in advance, the poor volunteers never know what I am talking about and it often takes about 20-30 minutes to even get them to prepare some sort of list for the press wanting to book interviews. When you bear in mind that the first rehearsal is on stage at 10, the press centre opens at 9 and there are other things to get on with, this can cause a little raising of the heart rate!
Not this year though - amazingly, wonderfully and to my deepest delight - the lists were already prepared in advance….who knew that Ukraine could be so organised???? So well done on that!

So all in all the day started off really well in the end….computers all worked, wifi and LAN were fantastic speeds (Thanks Swedish Tecchie guys) and not too many hordes of massed fans running around like school girls on a day out from St Trinians. All going so well so far yes??? Err well no, cos that’s when rehearsals started on the big screens….

Now we know that every year there are sound issues, always with the first run through. So if we know there are always problems, then surely the organisers should know the same? And maybe, you know, test things first? Nah, that would be too simply. So we were left with watching the big screen and attempting to listen to the sound coming from the arena next door. Which was fun. Anyway maybe I am being too harsh and expecting too much? Still it was all solved pretty quickly and left with the delight of the Swedish rehearsal.

Blogging is not really part of the things I get to grips with at the Eurovision each year, most of my work revolves around processing background stuff, like video, checking the work of the rest of the team, meeting with delegations to check for interviews, actually doing the interviews and generally just annoying people so I never really get a lot of time to watch the screens….but I do hear snippets of enough of the day to form a judgement on whats Fabulous, Great, Ok, and OMFG what the hell was that??? So here was my day in running order

Team Kaz has 2 full time and some part time English bloggers so if you want detail on who wore what, who did what to whom, and that Azerbaijan step Ladder please check them out….

The other huge part of my day was dealing with interviews, and we managed to get 4 out of 8 done yesterday with three being mine, Sweden, Albania and Montenegro. No real surprises with any of these as I’ve met them all before, apart from Slavko, he does get really in depth when you get him away from his on stage persona and get him talking on a level about some deeper though provoking stuff. He’s actually super intelligent and opinionated and kinda the guy I have a secret admiration for in the way he behaves and carry himself. Lindita is also the same, again get them talking about stuff away from Eurovision and underneath the surface gloss are some really deep individuals

I missed the interview with Finland, but I know that these two guys are the same as Slavvie and Linnie above, in that respect. Georgia’s Tamara seems a little off the wall, but in a totally great “don’t mess with me or I will destroy you” kinda way….still you can judge for yourselves on the clips. Robin was the one I still am trying to find a connection with every time I meet him though. I am still not sure if he is being reserved due to shyness or a lack of sleep or a lack of something else entirely but I will keep trying to find out what his buttons are and such them hard

All in all it was actually a great day, as “Eurovision Day One”s go, it all worked, we left the press centre on time, and still got to the restaurant in time to have food drink gossip with friends and actually look forward to Day Two without coming out in a cold sweat 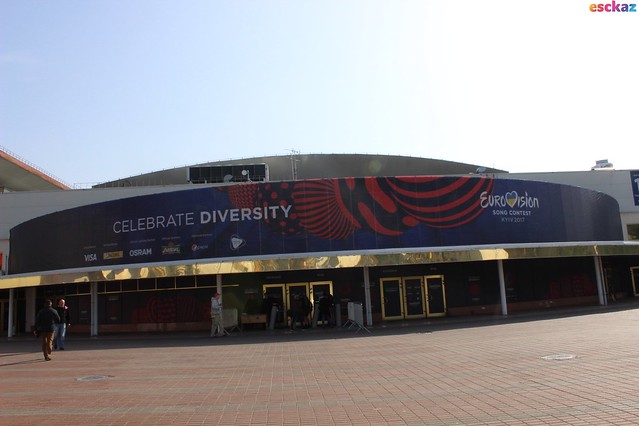