First order of business was Demy meeting with the ambassador who was clearly proud to welcome her and her team to his private home. They had a quick chat and as it turned out, the ambassador's son goes to the same law school as Demy, and they even knew each other! What a coincidence.

Right after, the invited guests enjoyed the prepared buffet of appetizers and drinks, and a lot of Greek officials took the opportunity to take selfies with Demy, who kept up her good spirits despite surely having had an exhausting day of rehearsing in the arena.

We also had a chance to speak to Demy's team of backing singers, Paris Paraskevadis-Planets, Erasmia Markidi and Evgenia Liakou, all three of them have never performed on a Eurovision stage before, are excited and looking forward to their performance. The backing singers told us that today's rehearsal helped them a lot, as they got better and more confident with one run through after another.

We also had a chance to speak to Demy's make up artist, Roula Marinopoulou, who told us that the make up for Demy's Thursday rehearsal was right on point and that we shouldn't expect any changes in that department as they were really happy with how it looked on camera. At an event like this, you really get an idea of how many people are contributing to bring us the perfect three minutes on the eurovision stage.

The two dancers ,who will be performing with Demy on stage at Eurovision, Marcus Giakoumoglou and Iasonas 'Jason' Mandilas are very entertaining guys. They told us in case of the stage being too slippery and one of them falling down, they made an agreement for the other dancer to fall down as well, to have complete symmetry on stage. Staging director Fokas Evangelinos surely approves this, as symmetry on stage has always been a concept he liked playing around with in his eurovision entries. 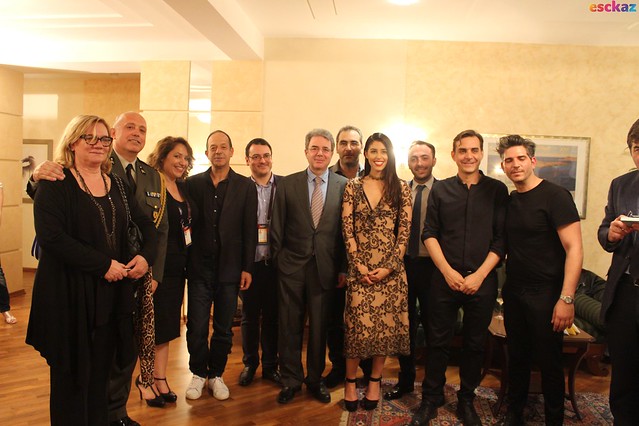