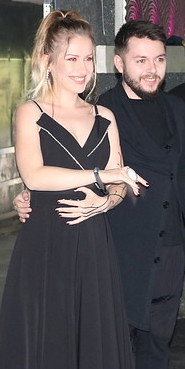 Bruce (Valentin Cristian Chiș)
Bruce is one of the two dancers who will perform on the stage from Tel Aviv, together with Ester Peony. Choreographer, actor and dancer, Bruce has a vast experience both on stage, and in television studios. Besides musicals and contemporary ballet shows, Bruce has danced in shows such as: “Britain’s Got Talent”, „X Factor UK”, „Dancing With The Stars”, „Your Face Sounds Familiar” or „X Factor Romania” and competed within Exatlon contest. As a coreographer, Bruce has collaborated for shows such as „Romanians got Talent”, „Bravo Romania”, Media Music Awards, Romanian Music Awards or „The Next Star”.
The young choreographer has worked side by side with many local stars, such as: Inna, Lora, Andra, Stefan Banica, Corina, Pepe, Morandi, Matteo or Andreea Bănică.

Mircea (Vlad Mircea)
Mircea is the second dancer who will accompany Ester in Tel Aviv, on the stage of Eurovision Song Contest 2019. Even if he has made a profession out of dancing, acting and modelling, Mircea has graduated the university of administration and business and he practices several sports such as: football, handball, swimming or cycling. His business card includes a rich experience in show-biz. Mircea has collaborated, in tours or for making his videos with numerous Romanian artists (Alexandra Stan, Inna, Smiley, Antonia, Alex Velea, Delia, Stefan Banica Jr, Loredana, Andra, Marius Moga, What’s UP, Andreea Banică, Horia Brenciu, JO, Lariss, Corina, Blacklist, Radiom Killer, Cristina Spatar, Skizzo Skillz or Mira), but also with international ones (Arilena Ara, Salvatore Ganacci)
He is a winner of the contest World of Dance 2016 Romania, with „The Haters Crew” and he was a part of the film distribution of the movie High Strung 2.

Adela-Daniela Baranci
She has graduated the Music University, opera/canto section and „George Enescu” Music Highschool. She started singing at the age of 6. She has collaborated with the famous soprano Irina Iordăchescu, and had concerts at the Romanian Atheneum and at Peles Castle, and, during her higschool time she sang with the Oxygen band. Also, the singer has a serious and complex career and experience within the IT field, without leaving aside not even for a moment her passion for music . This passion has brought her at the ESC 2019, together, with Ester Peony.

Antonia Elena Liță
PR, event coordinator or an interpreter with specialised studies, Antonia has all these positions written in her CV. On May 16th we will see her on the Eurovision stage within Ester Peony’s crew. She has graduated both the Music University Composition Faculty, Musicology and Musical Teaching and the Communication and Public Relations University – SNSPA. Antonia knows how to sing, to make PR and to coordinate events, so the Eurovision fits her like a glove.