I can only echo Desiree's thoughts on the Netherlands.

The harmonies were flawless and if juries judge vocal capacity they should have this very close to the top of their scorecard.
The backdrop features understated imagery, inspired by the very reason the song was written: it's a tribute to the sisters' ill mother.

Earlier today Lisa, Amy and Shelley from OG3NE already revealed their dresses in a video that was posted earlier on this blog. Happy to see they are wearing them on this rehearsal and I think they look great! Amy is actually wearing a jumpsuit instead of a dress, but they're all very sparkly and glamorous looking.

The backdrop highlights a few parts of the lyrics (for example a candle burning, two hands letting go of each other') which makes clear what the song is about for those who don't understand the song. The colours are quite dark but also the theme of hope is shown with a flowering tree.

I didn't mention the vocals yet because there is no surprise here. It was perfect and I would've been surprised to hear anything else. We've just seen and heard them once by now but I must say I'm very very happy with this rehearsal. 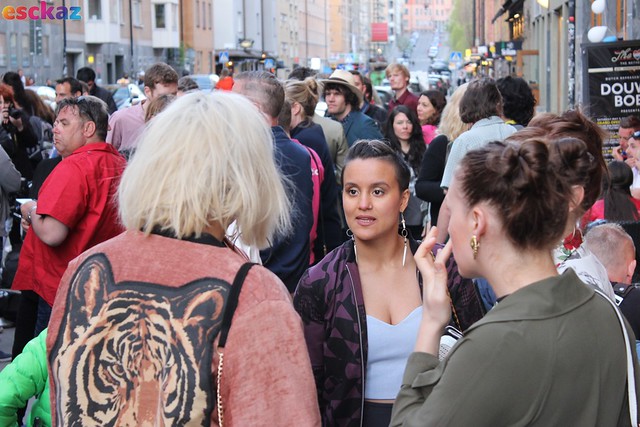 Press Conference for The Netherlands

Douwe has enjoyed the first days in Stockholm. He tells, that he has been horseriding and skinny dipping. So there is a potential for a nude scandal in the press. However the horseriding story is true. Douwe says, that: "It had to be the fastes horse in Sweden".

Douwe with his musicians performs on a small area with a LED-floor showing gigantic clocks. It looks cozy and special with a good contrast to other performances.
I'm still sceptic about this song but it looks more spectacular to look than to listen to in a studio version. Douwe is stable and charismatic vocalist and works with cameras really good.
Basically nothing happens on the stage, it's just Douwe singing and musicians imitating playing instruments. But you're not get bored!
It's difficult to believe in this song but we have unexpected finalists like this with simple but soulful melodic songs almost every year.

The Netherlands have made their second rehearsal soooo sooo soooo much better.
Trijntje's original dress has left the building and been swapped for a leather jacket and black dress. It's a much better choice in my opinion. The black lace head piece has remained for the first verse of the song.

There hasn't been much changes otherwise in terms of staging, but Trijntje seems to be feeling a lot more comfortable on the stage. I love the camera work that's been done too. Trijntje's more or less singing towards the tv audience and that really works in its favour.

A very good rehearsal for The Netherlands. This semi is already turning into a killer.

The Netherlands 2nd time on stage

The dress has gone nothing more needs to be said

Oh Trijntje, dear, dear Trijntje from the Netherlands. For the first time in a long time, we're starting to see many of the outfits artists are wearing for their upcoming semi's as requested by ORF, but Trijntje's making an impact but for all the wrong reasons.

Her performance starts off rather well, very intimate and close with a focus on Trijntje's face, which for the first verse is covered in a black lace, veil. But when the camera zooms out, and Trijntje's dress appears our fears for a fashion disaster become real. With a big low cut, showing a lot of boob, fans in the press center are already speculating Trijntje could win this year's Barbara Dex Award. Trijntje is a beautiful woman, but the dress she's wearing is certainly not flattering her.

Because fashion is so involved with the staging, I'm really unsure about Trijntje's overall staging visually at the moment. There are a lot of elements which look as if they have been thrown together right now and therefore don't work that well. We get a smokey background first, which then all the sudden changes to neon lights and then goes back to a range of metal looking fluo colours. Strange choices. On the other hand, just like last year, the close ups are once again really well done. And that's, together with her incredible voice, the Dutch biggest selling asset.

So in short, a great voice on the stage but visually The Netherlands need a re-think and go back to last year's approach and keep in mind that less is more.