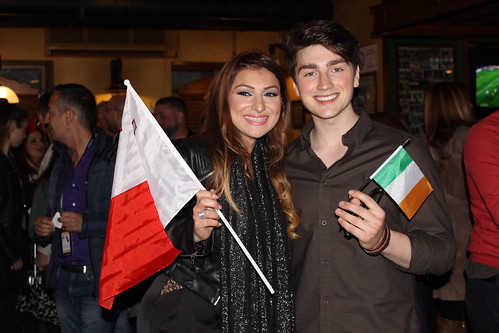 The performance from Malta is also largely the same as a few days ago during the first rehearsal. The backdrop starts with a waving piece of fabric, that is later revealed to be the dress Claudia wears on the backdrop. The visuals seem to be largely the same which means her chest is visible for quite some time in the hall, more than on screen where I already noticed it last time. This makes it all very tempted to give this song a new title (obvious?) but I will resist for now.

On stage it's still the same dress as we saw a few days ago.

As the song continues towards the second chorus the backdrop shows more and faster movement, in line with the added instruments in the music.

The vocals are just excellent every time, and gather the largest applause of the day so far. Goosebumps.

Claudia with another passionate, heartfelt and vocally flawless rehearsal. Unfortunately it feels like very long three minutes, as the song is just a little too predictable and doesn't provide any layers of depth like other Ballads we heard from Finland, Portugal etc.
But those are in the other semi final, which might help Claudia out a bit. She would deserve it.

Highlight of the 2nd evening in the Euroclub was Oikotimes 21 party, attended by performers from Malta, Ukraine, Moldova, Romania, Azerbaijan, Poland and Czech Republic. Several more delegation members were at the party, but without their singers. Very uncommon thing for the Eurovision Club parties was the amount of young girls, who obviously enjoyed performances. However, so did we.

Claudia Faniello is wearing a cream coloured long dress and she is shown on the led-screens at well. At some moment this causes some interesting images as then it is filmed from her middle going up, so just her chest on the screens before her face is shown.

At the same time I don't think this is a major issue, might be something to look into though. Vocally she is excellent as always and while the song is probably a bit old fashioned, there are some parts in the melody of the chorus that touch me. I'm starting to have a bit of a weakness for this...

After three uptempo/midtempo ballads it is also nice to have a proper ballad. It looks great, it sounds great, could this do better than people expect?

Claudia's first run through and we can already say with certainty that she is vocally flawless. Not much is happening in the staging and the focus is on Claudia in a white dress. There are quite a few wide angle shots and I can imagine the audience will be waving with cell phone lights to this ballad which should add a nice touch.

Ira was asked about her view of the difference between her participation in 2002 and this year. The obvious is, that last time, there were fewer countries and not the semifinals. But also the social medias has been introduced and given her a possibility to be in contact with fans, which she loves.

Review of the second semi-final by Keith Mills

I decided not to hang around for the qualifier press conference tonight as I have a pretty hectic day tomorrow, but I have now caught up with the halves of the draw that the ten countries will perform in. It really has ended up as a show of two halves with most of the uptempo songs in the first half and the ballads and slower moody songs in the second.

Overall I think tonight's show was far better than Tuesday's. The songs were better, the pacing was sharper and there was less of last year's winner, though still far too much. The camerawork was also improved, but the issue with flags blocking the screen is still a major problem and has to be sorted on Saturday.

As for the seven songs that went out, only Switzerland and Ireland can feel hard done by and Poland qualifying was a bit of a shock. Some are suggesting it was a sympathy vote, but it was also helped by the draw so perhaps not totally unpredictable.

My thoughts on the seven that went home;
IRELAND: I think Molly performed well and for once I liked the Irish staging. However I thought we were probably doomed on the day we were given the awful #2 draw and so it came to be. I may sound like a broken record here but once again can I suggest RTÉ looks at its selection process. The current formula is giving is the worst set of results we've ever had in the contest.

SAN MARINO: Dreadful patchwork of a song and no amount of youthful enthusiasm can replace a lack of stage craft. It was always a no-hoper. It deserved to finish last and being honest, if this is the best that they can come up with, San Marino has no place in the contest.

MALTA: A much better performance by Amber tonight but there was far too much going on to distract you in the presentation.It was as if no lessons were learnt from Olivia Lewis in 2007. The song was always too weak for this semi, but might have had a chance in the first semi. No surprise this lost out.

PORTUGAL: The Portuguese chose the wrong song in the Eurovision selection, it's as simple as that. No matter how good Leonor was tonight (and she was very good), the song was just poor. Like Ireland, Portugal needs to re-think its selection process. There's enough talent there to do very well in the contest but RTP are not tapping into it.

CZECH REPUBLIC: Whoever decided to add the ridiculous shoe throwing to the act should never be allowed near the contest again. Until that point the performance was solid, even if the song was always a little dull. I fear that we may never see the Czechs back in the contest.

ICELAND: Not only the worst vocal performance of the night, one of the worst of this century. It was always a big heap of nothing of a song, with basically a repeated chorus and no verses but everything about this was absolutely dreadful from he staging to the costume, but especially the off-key performance.

SWITZERLAND: I really feel sorry for Melanie, because this was a terrific performance and hugely improved on the national final. Switzerland just doesn't have friendly neighbours or a diaspora, but if Austria can win, so can they. Really disappointed not to see this in the final.

That's a lot of up-tempo and mid-tempo songs. Personally I'd probably open with United Kingdom, then go with Armenia and Sweden, for contrast. I would have Israel at #13

There's no up-tempo song in there at all, but Georgia, Germany and Montenegro are at least mid-tempo. Hungary, Greece, Russia and Spain need to be kept apart. The director will certainly earn his money tonight.

Tomorrow I will review the running order, as I fly back to Dublin.