The Romanian band for ESC 2015 arrived in „Eurovision hometown” on Monday evening. First rehearsal is expected at 15.30 p.m. today

„We can hardly wait to live the Eurovision experience! We are prepared and ready for the contest. We hope the staff from Vienna can fulfill our requests, so that our moment in the show comes out as we wished for”, are the words of the leading vocal Călin Goia before leaving for Vienna. The Romanian representatives at Eurovision Song Contest 2015 – the pop-rock band Voltaj – flew to Austria on Monday afternoon, together with the delegation coordinated by Liana Stanciu, after a press conference organized right in the airport of Bucharest.

“I’ve listened to all entries and every time I seem to discover something new... Many good songs are in the contest, but I’m sure the message of the Romanian entry, De la capăt (All over again), will make a difference for us. You may not know that, but the little boy form Voltaj’s video – because the story of the video is a real one! – will be in Vienna, together with his parents, at the Eurovision final. That is what we fight for: beautiful, united families, parents and children altogether. Voltaj carries the message of a generation and we all hope you share it with us”, said Liana Stanciu, the Romanian Head of Delegation.

The band Voltaj will be on the stage of Wiener Stadthalle in the first Semifinal of Eurovision Song Contest 2015, on May 19th, entering the 15th position in the contest. Voltaj represents Romania at Eurovision, with the song De la capăt (All over again). 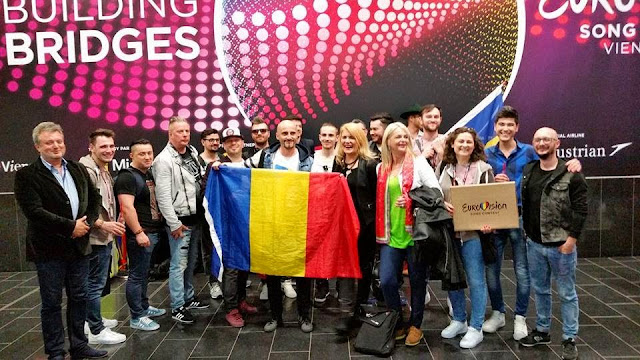 More info about Voltaj and a press kit you can download here: http://eurovision.tvr.ro/press-kit/