A tasty Mediterranean buffet is placed on your table. Glasses are being raised across the room. Everything happens on a magical evening in several acts filled with singing and dancing, daredevil stunts, Greek Gods, flirty waiters, and perhaps a Zorba and an Ouzo or two. The rest is up to you. Because no evening is like any other. And no one knows how it ends. It all depends on where ABBA's songs take us! But one thing's for sure: you can count on a Summer night city. The temperature at Nikos Taverna is always set on Greek high summer, regardless of season. Ready to make history? Opa!!

Björn Ulvaeus invites everyone to "Mamma Mia! the Party" in Stockholm. Mamma Mia! musical is being turned into party held in the Tyrol restaurant at Gröna Lund, a few steps from ABBA The Museum. Building on ABBA tunes, one of Swedish greatest musical export successes ever, Björn Ulvaeus captured the warm, happy atmosphere of the musical and movie Mamma Mia! that have conquered millions of people around the world and turned it into a party. Planning for the production has been ongoing for 2 years with first sketchy details revealed in April 2015.

ESCKAZ had the opportunity to talk to Björn Ulvaeus who is the executive producer and one of the initiators of Mamma Mia! the Party, which premiered in Tyrol on 20 January 2016. At the age of 70 Björn who calls himself "pop culture entrepreneur, investor and lyricist", is full of energy, has no plans to retire but not to get back to the active composing or stage activity either. His vision of the new show is that guests, restaurant staff, musicians and artists together create the party in the Greek tavern environment from the island of Skopelos, where the Mamma Mia! the movie filmed, with olive trees, fountain and scents of the Mediterranean. With the help of the ABBA songs they write that particular evening's history there and then. With Mamma Mia! the Party are linked the two big attractions: ABBA the Museum and Gröna Lund amusement park, creating a new public magnet at Djurgården. For this purpose, legendary Tyrol restaurant has been transformed in 2015 by set designer Bengt Fröderberg into a Greek tavern.

"I sat in the audience at theaters around the world and experienced the special warm, happy atmosphere that occurs when the first notes of the musical sounds out over the auditorium. And when people stand up and dance and sing at the end of it. That is the feeling I want to recreate at the Mamma Mia! the Party", says Björn Ulvaeus

Mamma Mia! the musical has so far been seen by 55 million people around the world. The musical premiered at the Prince Edward Theatre in London on 6 April 1999. A total of 49 stagings in 16 languages were produced ​​and it is still being played in 8 productions in three different languages. The film based on the musical premiered in 2008 with actors like Meryl Streep, Pierce Brosnan, Colin Firth, Amanda Seyfried and Stellan Skarsgård. Last year Eurovision accredited press and delegates were invited to attend for free one of the best world stagings in the show Mamma Mia! in Raimund Theater with Ana Milva Gomes and Madeleine Lauw.

Today, ESCKAZ team has been invited to attend the English version of Mamma Mia! the Party. The story is not same as in Mamma Mia! the Musical, it takes place after Mamma Mia! the Movie was filmed on Skopelos Island and evolves around Greek tavern owner Nikos and his new Swedish wife Kicki (who was working on The Movie production and decided to stay in Greece) who came up with the idea to organize every evening a Mamma Mia Party in their tavern while serving great food for the tourists, executive chef of the tavern Maggan, Nikos' daughter Konstantina, Kicki's son Adam and the Romeo & Juliet story between the latter two, complete with the balcony scene. There is also plenty of room for improvisation and audience participation, if the guests are up for it (and if you celebrate your birthday musicians will also play and sing a special version of Happy Birthday for you). 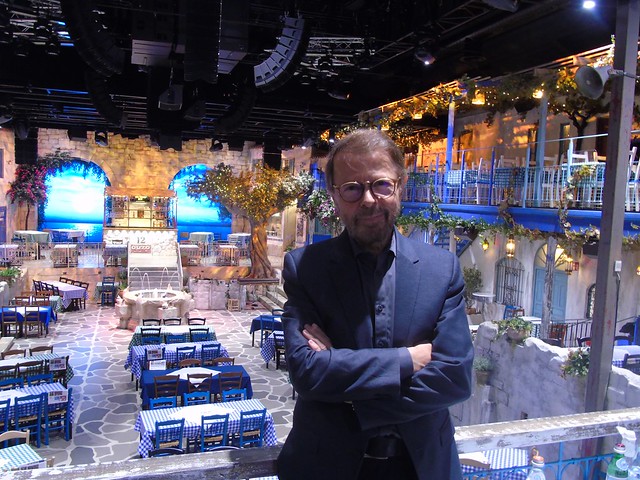 Upon entering ‘Nikos Tavern’, the guests are greeted by Greek Gods bearing trays of Ouzo shots, before being shown to their tables and handled a local gossip newspaper "Skopelos News" with details about the cast, crew and menu. Inside Tyrol, the temperature is always set to a Greek summer evening, so dress accordingly (cloakroom in the restaurant is free of charge). An astonishingly detailed set includes the frontage of a Greek souvenir shop and a backdrop of screens showing a real Grecian sunset, which changes throughout the evening while surround effects such as the sea, crickets etc bring alive the Grecian backdrop of the popular Abba movie, Mamma Mia! Vines trail the crumbling walls, fountains dance and the air is heavy with the scent of olive trees and jasmine. As the evening progresses, the light gradually fades out as the sun goes down and candles begin to flicker. While the guests enjoy their food, the show takes place around them. There is no stage, instead the cast delivers their dialogue, sings and dances between the tables on the restaurant floor creating complete 360° experience.

Get some taste of the music and practice your lyrics knowledge with ABBA originals:

The striking-looking performances are made on the lesser-known songs, "I'll let the music speak" and "I'm a marionette," which offer spectacular circus acrobat numbers with Talang show finalist Elin König Andersson, leading to the grand finale of the story itself with "Kisses of Fire". At this point, the only regret is that the story so quickly has come to the end - but the organizers predicted such reaction and is prepared a third act for all the visitors, which although isn't developing the storyline, but none-the-less is full of ABBA songs.

The evening ends with Greek Zorba dancing (for which "I Had A Dream" seems the perfect fit), the tables then are moved to transform the venue into the nightclub with the dance floor and then, there is another performance that includes a medley of songs of Abba. Those guests who had not enough of 4 hours of party during the show itself can continue discoing with the DJs even after the artists have left on the recorded soundtrack of the show, other music of ABBA and dance hits. 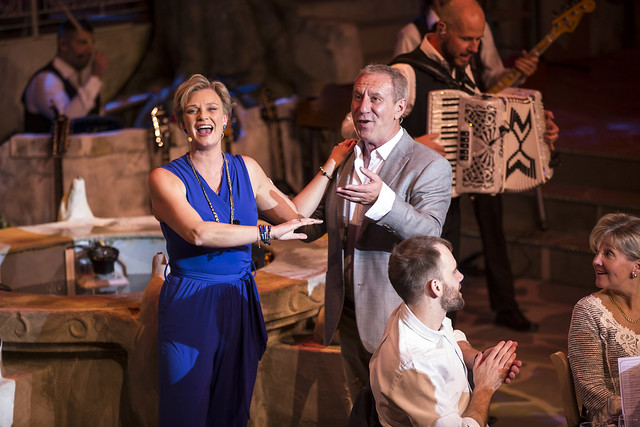 Sussie Eriksson starred as Karin in Swedish production in Mamma Mia!, Michael Blomqvist, being many times leader of huskören of Melodifestivalen, was choir member for Mamma Mia! The Movie and also performed in Swedish stage production as well as Anki Albertsson, who was Donna in Gothenburg staging and backing singer at soundtrack recording. Pablo Cepeda twice competed in Melodifestivalen. Michalis Koutsogiannakis is known for his participation in film adaptation of Millennium saga.
Mamma Mia! the Party produced by Eventum in cooperation with Björn Ulvaeus, scripted by Calle Norlén, Björn Ulvaeus and Roine Söderlundh, with latter being also director of the show.

The whole lineup of actors and musicians is absolutely exceptional, competent and professional and are perfectly casted into the roles. Highlight of the show, however, is no doubt performance of stunning Swedish/Hungarian/Russian singer Mercedesz Csampai (watch out for her emotional rendition of The Winner Takes It All and her literally hanging-in-the-air performance of Voulez-vous in the final medley) who previously starred in various international music productions including "Tanz der Vampire" in Berlin and "The Phantom of the Opera" in Moscow. 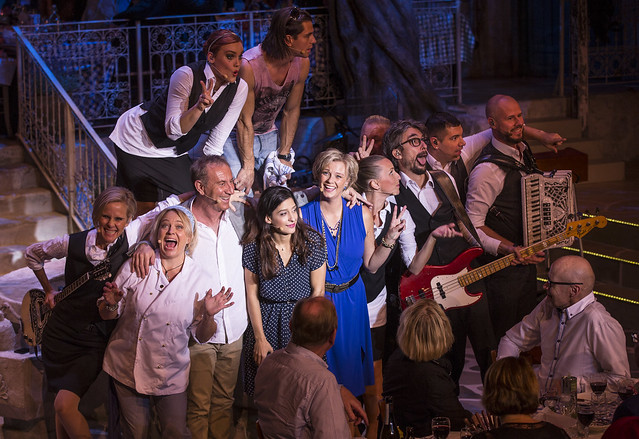 Tickets for the shows can be booked at ticnet.se. At the current moment on sale are shows till April 2017. You should absolutely buy tickets in advance, because the shows are usually sold out. Tickets cost 1340.00 SEK (around 145 Euro) per person may seem quite high at the first sight, but remember it includes dinner, and thus is in average the same as the cost of the quality concert attendance followed by a good dinner. You can also purchase combined package including admission to ABBA The Museum for 1535 SEK. Time of arrival varies on day of the week and is found on your ticket, doors remain open for appr. 45 minutes from listed time.

If you plan to visit Stockholm this summer, the Party will be in English between July 27 to August 21, the other days Swedish version of the show is played (with songs still in English).

The party will last for at least four hours (of them the show itself around hour and a half). Capacity of the restaurant is 450 visitors. Minimal age: 13 years, aged 13-18 are welcome accompanied by adults. Tables are reserved in the order they are booked, so there is no option to choose them. If you come in a large group you may occupy a full table for 8 or 10 people, otherwise you may be required to share a table with other ABBA fans. The plan of the hall is made to ensure best possible experience for all tables, but largest portion of action takes place around the fountain, left balcony is also used a bit more often than right one. Groups bigger than 15 persons can be booked via e-mail: ticket@mammamiatheparty.com, also can you request there (not less than a week before the show) to be seated together with your friends who booked tickets separately.

A three-course mediterranean buffet is included in the ticket price, and is served at your table. The buffet is produced by Samuel Cabrera and his culinary colleagues, in consultation with Jonas Dahlbom, the new creative culinary manager at Gröna Lund. Dishes are served prior to the beginning and in the breaks between the acts.

Mezes: Tzatziki, Semi-dried tomatoes, olives and anchovies, Hummus, Greek farmhouse bread
Starters: Greek salad, Garlic-fried octopus with lemon and rosemary, Fish stew made with hake, tomatoes, and lemon served with sage butter
Main dishes: Lamb racks with pistachio crust, beef and chevre cream, Loin of pork skewers with roast potatoes, Lamb sausage
Dessert: Coffee, ouzo-flavoured semolina cream, pistachio crust, yoghurt pannacotta with honey and almond biscuits.
Options are available for those with gluten or lactose intolerance, or with seafood allergies. Vegetarian or vegan menu can also be prepared if notified by mail in advance. Drinks, except from welcome one, are extra and paid at Tyrol, and, of course, there are alcohol-free alternatives.

Producers of the show do not rule out international expansion of the project in the same way it has happened with Mamma Mia! the Musical (London production is at the talks already), but at this moment it is exclusively available in capital of Sweden Stockholm. The easiest way to Tyrol restaurant is by Djurgårds ferry from Slussen (last ferry back is at 23:50 everyday and at 00:30 on Saturday), or bus 67 to Liljevalchs/Gröna Lund (last bus back at 00:20), or tram 7 from Kungsträdgården to Djurgården (last one at 01:45). More on transport options: here, route planner here. Tyrol has its own entrance at Allmänna Gränd and is located on the other side of the street from the ABBA The Museum and Pop House.

By the way, Swedish entrant Frans was guest of Mamma Mia The Party last week:

Amir, Samra, Juri, Zoe and Italian delegation have also visited the event during these weeks. The world premiere of Mamma Mia! the Party earlier this year was a historic occasion as all four ABBA members, Agnetha Fältskog, Anni-Frid Lyngstad, Benny Andersson and Björn Ulvaeus, attended and posed together for the first time since Mamma Mia! the movie presentation and just second time after the supergroup split. "I don't think that (on-stage) reunion will happen, but who knows (what future brings)", surprisingly no so firmly as usual says Björn in ESCKAZ interview. 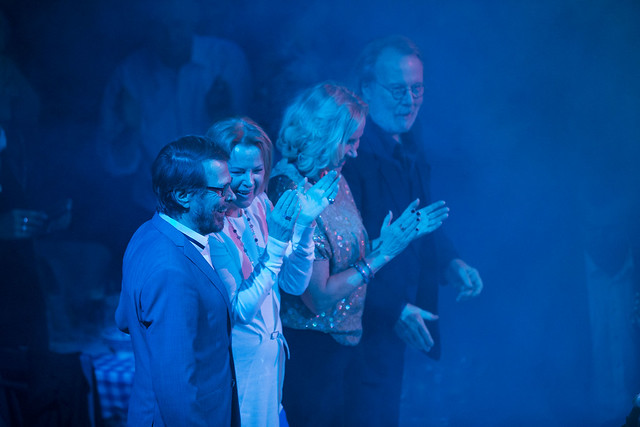 For us the show definitely has been the ultimate highlight of the two weeks in Stockholm with amazing music performances and finally a chance to have a proper dinner. Finally, we would like to thank Stephanie Bonn from Zap PR for her assistance in coverage of the event.